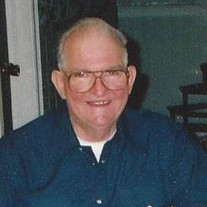 Walter Davis Hill was born on Jan. 28, 1935 in rural Hanna, Ok. He passed away in Pawnee, Ok. on June 19, 2019. He married Stella Fisher on July 20, 1954 and they had five children. They divorced in 1980 and soon after he married Esther Baker on March 25, 1982.. He was preceded in death by his second wife, Esther Hill, his parents Ira and Alta (Massengale) Hill, five brothers, Haskell and baby boy Hill (twins), Kenneth Hill, Burl and Earl Hill (twins), four sisters Reba and Greba Hill (his triplets), Wilma Dowling and Maxine Burleson. He is survived by his five children. Robby Hill and wife Carol of Checotah, Ok., Mike Hill and wife Linda of Smiths, Al., Cindy Townsend of Morrison, Ok., Denise Larson and husband Lee of Cushing, Ok., Donna Zapp and husband Doug of Shawnee, Ks., and one sister, Christine Layman of California. 14 grandchildren, Denika Bragg, Kristan Cooley , Candace West(great granddaughter), Christy Cousins, Tammy and husband James Hollan, Ricky Holba, Joshua Arnett, Zack Arnett, Brittney Larson, Sean and wife Diana Zapp, Brian Zapp, Michelle Zapp, and 19 great grandchildren. One great granddaughter Brinley Holba was much help to her grandmother, Cindy, while caring for her father. In earlier years Walt and Stella lived in California where their five children were born. Later, they moved to Ada, Ok. where Walt worked as the General foreman for Brown and Root in Konawa, Ok. building electric plants for O G & E. They moved to Stillwater, Ok. while he was still with Brown and Root at Red Rock. Walt was an avid musician playing guitar and fiddle. Playing with musicians in California and Oklahoma. He loved to play and his music will be missed. After he retired from Brown and Root, he and his wife moved to California for many years. He moved back to Henryetta for several years. After his wife passed away, he moved to Morrison, Ok. to be closer to his children where he spent his final days. Funeral service will be 10:00 am, Saturday, June 22, 2019 at the Rogers Funeral Home Chapel with Rev. Jack Vance, officiating. Interment will follow at the Hanna Cemetery under the direction of the Rogers Funeral Home.

The family of Walter Hill created this Life Tributes page to make it easy to share your memories.

Send flowers to the Hill family.