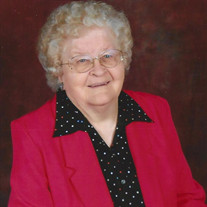 Thelma Bernice Meadors, Born December 23, 1923 in Paden Oklahoma to John W. & Mollie Mae (Little) Cunningham. Thelma worked as a Dietary Manager at Henryetta Hospital for 29 years. She has been a member of The First Church of the Nazarene since 1944, serving in many areas as Sunday School Teacher, Missionary President, the Kitchen Ministry and several other areas. Thelma had a card/letter ministry- sending encouragements to ones in need, missionaries and servicemen in the military. She had a heart for young people and would send cards to encourage them in their journeys. She was also honored by the church with the Distinguished Service Award. Thelma was brought to her daughter Linda’s home to finish out her time so she could be surrounded by the ones she loved and who loved her. Clay would have been proud how well Thelma was pampered over and taken care of. Thelma was preceded in death by her husband Clay Meadors and infant son Ronald Meadors, parents John & Mollie Mae and Brother Carl Cunningham. She is survived by: Her Three “Strong and Amazing” Daughters: Joyce & James Howard of Owasso Oklahoma Linda Sains & Jim Lonsdale of Henryetta Oklahoma Patty & Vernon Van Meter of Henryetta Oklahoma Her 7 “Superhero” Grandchildren (One of which is the favorite): Butch Howard, Mike Sains, Jeff Howard, Jamie Howard, Tammy Merritt, Stephanie Tomlinson, Karie Dombek And while there are really no others to list than those above, Mama would like the world to know she also has: 16 Great Grand Children: Cortney Dick, Clay Sains, Lexxi Spraberry, Mika Wireman, Laura Castillo, T.C. Sains, Jeffrey Dombek, Jon Howard, Matt Dombek, Megan Merritt, Brendan Tomlinson, Holland Boyington- Howard, Ali Dombek, Abbey Merritt, Aidan Tomlinson, Lucas Pacin, Mollie Howard-Graham. 2 Great Great Grandchildren: Peyton Dick & Cambree Dick Sister Juanita Shandy, Brothers Doyle & Bob Cunningham and a host of nieces and nephews. Family will be receiving friends and family Tuesday Evening from 5 to 7:00 at the funeral home. Funeral service is 10:30 am, Wednesday, December 20th at the Nazarene Church. Interment will follow at the Westlawn Cemetery under the direction of the Rogers Funeral Home.

Thelma Bernice Meadors, Born December 23, 1923 in Paden Oklahoma to John W. & Mollie Mae (Little) Cunningham. Thelma worked as a Dietary Manager at Henryetta Hospital for 29 years. She has been a member of The First Church of the Nazarene... View Obituary & Service Information

The family of Thelma B Meadors created this Life Tributes page to make it easy to share your memories.

Send flowers to the Meadors family.