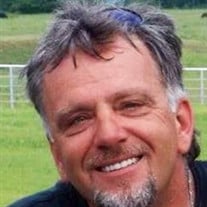 Steven Dwain "Steve" Shelton, 50, of Henryetta was returned home to Jesus on Sunday, October 25, 2015. He was born in Drumright, OK., on June 20, 1965. Son of Janet (Varnell) and the late Brady Shelton. Steve attended public schools in Oilton, Henryetta, and Wilson, OK. After high school, he served in the National Guard and later attended Tulsa Welding School, where he graduated as a certified welder. He enjoyed both welding and construction work, and was an employee at Magnum Construction Company of Tulsa, at the time of his death. Steve's career provided him the opportunity to live in and travel various parts of the United States. Throughout his travels he made numerous friends, learned about different cultures, and discovered a passion for cooking; especially cajun food. He had a love of nature and all things outdoors: fishing, gardening, working his horses, and occasionally even hunting for an alligator. Among spending time with his children and family, one of his favorite pastimes was routing for his football team, the Oklahoma Sooners. Steve loved to give of himself through volunteer work and helping anyone in need. He spent countless days cooking meals to serve to the hungry, and homeless communities. Above all, he loved The Lord. He showed his dedication by spreading the word of God and sharing his own personal testimony to others who were struggling. He was a member of the Liberty Southern Baptist Church in Enid, OK., in addition to having many other churches he called "home" during his lifetime. Steve's family can proudly say that he left a lasting impression on everyone he met with his charm, which was only surpassed by the size of his heart. His energy, spirit, mischief, and kindness for those he loved are what his friends and family will remember most. Steve will be greatly missed and forever loved by those he left behind. He is survived by his mother, Janet "Jan" Dickey of Henryetta, son, Bill Carter and wife Ericka of Henryetta, daughter Chelsea Gagnard of Prairieville, Louisiana., son Steven Gentry of Stillwater, and daughter Shelby Shelton of Stillwater, granddaughter Madeline Carter of Henryetta, and grandson Jarrett Cummings of Prairieville, Louisiana. Steve also leaves behind three sisters, Kim Trunk and husband Bruce of Stillwater, Gina Shelton of Okmulgee, Lisa Kern and husband Greg of Henryetta, stepfather Dave Smith of Henryetta and a very special friend, Ann Archer of Glenpool, as well as a host of aunts, uncles, nieces, nephews, and cousins. He was proceeded in death by his father, Brady Shelton, infant sister, Lasaundra Shelton, maternal grandparents, Gerald and Beulah Varnell, paternal grandparents, Theodore and Nellie Mae Shelton, and extended fathers, Lavern Jordan and Wayne Dickey, Sr. A Memorial service to celebrate Steve's life will be held at 10:00 am, Friday December 18, 2015 at the Rogers Funeral Home Chapel, in Henryetta.

The family of Steve Shelton created this Life Tributes page to make it easy to share your memories.

Send flowers to the Shelton family.