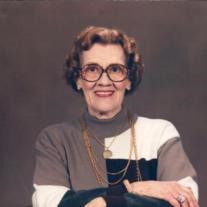 Ruth Cope a resident of Henryetta passed away on July 15, 2011 in Henryetta at the age of 90. Born February 11, 1921 in Wyatt, West Virginia to Alfred and Ida (Underwood) Ice. Ruth attended grade school at Wyatt, WV and high school in Shinnston, WV graduating in 1939. Ruth married Ralph Cope on October 28, 1948. Ralph Cope passed away in October of 2000. Ruth worked for Westinghouse during WW II and retired from Southwestern Bell in 1970 in Odessa Texas. Ruth’s career started with Southwestern Bell in January of 1948 and then transferred to Deming New Mexico in 1953 with Mountain States Bell. Ruth moved to Odessa Texas in 1957 and retired from SBC in 1970. Ruth is affectionately known and referred to as “Aunt Ruthie” by relatives and friends and brothers and sisters in Christ all over the USA. Aunt Ruthie’s greatest passions in life were to teach others about the Bible, instruct young women and girls in all areas of being a keeper at home, and to meet the needs of anyone she knew she could help. Aunt Ruthie was always cooking meals to take to sick people, and meeting the needs of people who otherwise would have been overlooked. No one left Aunt Ruthie’s home hungry. Aunt Ruthie loved her family and friends and always sent birthday cards and exchanged Christmas cards even when it became difficult for her to write them herself. There is only one Aunt Ruthie and she will never be forgotten by anyone who knew her, because she showed her unique love to everyone she met. She is preceded in death by her parents, Husband Ralph, Sisters: Carrie Heldreth and her children; Betty Lou Heldreth, Dorothy Hulderman, and Morris Eugene Heldreth. Sister: Beatrice Lawson and her children; Fred G. Lawson and James (Jim) D. Lawson. Survived by 2 Niece's : Vera A Hess and Norma Steffick Great Niece's: Linda Hidio, Nancy Johnson, Shirley Blakemore, Shelly Gale Capel, Kelly Lawson Zeringue, Andrea Lawson Bokey. Great Nephews: John Lockhart, George Lynn Hess, Mike Steffick, Patrick Steffick, Aaron T. Lawson, Alfred G. Lawson Family will be greeting friends Monday from 6:00 pm to 8:00 pm at the Rogers Funeral Home Service will be 10:00 am, Tuesday, July 19, 2011 at the Church of Christ.

Ruth Cope a resident of Henryetta passed away on July 15, 2011 in Henryetta at the age of 90. Born February 11, 1921 in Wyatt, West Virginia to Alfred and Ida (Underwood) Ice. Ruth attended grade school at Wyatt, WV and high school in Shinnston,... View Obituary & Service Information

The family of Ruth Ice Cope created this Life Tributes page to make it easy to share your memories.

Send flowers to the Cope family.