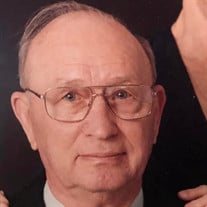 Robert Lee Barnett, a resident of Henryetta, passed this life on March 1, 2022 at the age of 92. He was born September 20, 1929 in Saratoga, Arkansas to Grover and Artie(Yates) Barnett. He married Rose DeColbert on March 31, 1948. He proudly served his country and was a WWII Veteran. He held many jobs including a butcher at Square Deal grocery store, Miner in Colorado and New Mexico, Industrial Radiographer working on the Northwest Alaskan pipeline, and owner of Barnett Storage. He was a Master Mason of 53 years, a member the Oklahoma Eastern Star, The Scottish Rite and a Shriner. He served on Henryetta City Council and was on the Housing Authority Board. He was an advocate of higher education and was key in implementing the Henryetta Masonic Lodge Scholarship Fund. He and Rose enjoyed helping the community and youth of Henryetta in many capacities. He was a member of Immanuel Baptist Church. He enjoyed gardening, mowing grass, watching over his storage buildings, attending Masonic Lodge, and bragging about his grandchildren and great-grandchildren. He is preceded in death by his wife of 69 ½ years Rose Barnett: his children James Barnett and Susan Manis; grandson Ace Manis. Great Grandson Kade Britt. Brothers JT, Captain, Junior, Lloyd, and Glenn Barnett; Sister Nancy Whaley. Survived by his grandchildren: Leyah Britt; Amy Dickey and husband Michael; Darcy Hunter and husband Todd; Billy Smock and wife Kim; Great-Grandchildren: TJ, Nikki, Kelby, Daisy, Bradley, Phoenix, Gryphon, and Alyssa. Great-Great Grandchildren: Wyatt and Chazzalyn. Brothers; Johnny Barnett and wife Sondra and Troy Barnett. In lieu of flowers donations may be made to Tulledega Lodge #201 Masonic Scholarship Fund, Henryetta, OK. Memorial will be 10:00 am, Friday. March 11, 2022 at the Rogers Funeral Home Chapel. Arrangements are under the direction of the Rogers Funeral Home.

Robert Lee Barnett, a resident of Henryetta, passed this life on March 1, 2022 at the age of 92. He was born September 20, 1929 in Saratoga, Arkansas to Grover and Artie(Yates) Barnett. He married Rose DeColbert on March 31, 1948. He proudly... View Obituary & Service Information

The family of Robert “Bob” Barnett created this Life Tributes page to make it easy to share your memories.

Robert Lee Barnett, a resident of Henryetta, passed this life...

Send flowers to the Barnett family.