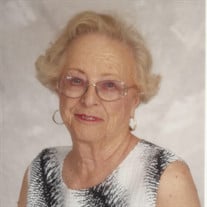 Pauline Donathan Kennedy Daniel It is impossible to capture all the facts and details about such a busy lady in such a short space, but here are some of the highlights of her life. Pauline Donathan was born to Ike and Alice Eaton Donathan on September 10, 1917 in the Wilson Community of rural Henryetta, OK where she lived most of her life until her death in Tulsa, OK on Sunday, January 25, 2015. She attended school at the Wilson Public Schools until she was 16 and fell in love with Noel Hudson Kennedy and decided to drop out of school and get married on April 23, 1934. They lived in the Wilson Community all of their married life. To this union was born four children: Peggy Jo in 1935, Calella Noeline in 1938, Jesse Wayne in 1940, and Judy Evon in 1942. After being married for 38 years, Noel went home to be with the Lord on March 11, 1973. On July 28, 1979, Pauline married Albert (Frenchie) Daniel and was married to Frenchie until his death in 1990. Pauline went back to high school and received her high school diploma after her children were grown. During her adult life she was always very active in the Wilson Home Extension Club, the Wilson Thimble Club, she wrote a weekly article for the Henryetta Free-Lance about all of the activities going on in the Wilson Community, was one of the record keepers for the Wilson Salt Creek Cemetery, was a worker for the Okmulgee Election Board for 50 years, and anything else she could do to make the Wilson Community a better place to live. She loved to watch the Wilson Tigers and Lay Tigers play any sport. Her eyes would light up and her ears perk up anytime she heard the name Wilson Tigers even till she died. She was an active member of the Wilson Baptist Church from the time she was saved during her teenage years until she was forced to go into the Fountain View Manor Nursing Home because of health reasons. She was known as the ultimate hostess, both at home and in her church. She was always concerned about the welfare of others when they visited her home, when they were sick, when they had a death in their family, of just at a pot luck dinner at the church. During her years at the church, she served as Sunday School Director, Christian Training Director, Church Secretary and Treasurer, Sunday School Teacher, Vacation Bible School Teacher, and anything else she was needed to do. She is known for teaching more children the books of the Bible by having them memorize a son of the Books. Until today, many children in the Wilson Community can sin the Books of the Bible. She was preceded in death by her mother – Alice Eaton Donathan; Father – Ike Donathan, Sr.; Husband – Noel Hudson Kennedy; Husband – Albert Daniel; daughter – Peggy Jo Kennedy; son – Jesse Wayne Kennedy; brothers – Bluford Donathan, Drew Donathan, J.B. Donathan, Ike Donathan Jr., and Eugene Donathan; and a sister – Pansy Donathan Pruitt. She is survived by her daughters – Calella Kennedy black and husband Ronald, and Judy Kennedy Porter and her husband Paul; five grandchildren – Ronnie Wayne Black, Jon Wesley Black and wife Elaine, Randy Allen Tippie and wife Alisha, Sherri Black Parker and her husband Trampas, and Lisa Tippie Weeden and her husband Jimmy Don; 9 great grandchildren, and 8 great-great grandchildren. She was deeply and affectionately loved by all and will be greatly missed. Family will be greeting friends and relatives at the Rogers Funeral Home Chapel, Wednesday, January 28, 2015 from 6:00 to 8:00 pm. Service will be 2:00 pm, Thursday, January 29 at the Wilson Baptist Church (Wilson Community) with Rev. Ron Black and Rev. Jack Vance, Officiating. Interment will be at the Salt Creek Cemetery under the direction of the Rogers Funeral Home.

Pauline Donathan Kennedy Daniel It is impossible to capture all the facts and details about such a busy lady in such a short space, but here are some of the highlights of her life. Pauline Donathan was born to Ike and Alice Eaton Donathan on... View Obituary & Service Information

The family of Pauline Daniel created this Life Tributes page to make it easy to share your memories.

Pauline Donathan Kennedy Daniel
It is impossible to capture all...

Send flowers to the Daniel family.