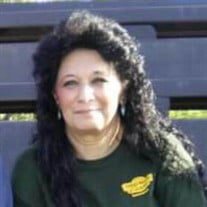 Patty Ann Gray a resident of Henryetta passed away on October 28, 2015 in Tulsa, Ok at the age of 61. Born September 26, 1954 in San Antonio, TX . She retired from the Glass Plant in Henryetta and was a member of St Michaels Catholic Church. She... View Obituary & Service Information

The family of Patty Gray created this Life Tributes page to make it easy to share your memories.

Patty Ann Gray a resident of Henryetta passed away on October...

Send flowers to the Gray family.