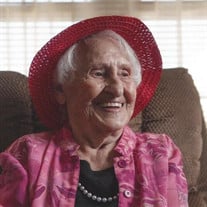 Mildred E Martin a resident of Henryetta passed this life on September 15, 2019 in Henryetta at the age of 101. Born March 21, 1918 in Guntown, Mississippi to Robert and Minnie Faye (Whitten) Clark. She married Floyd Martin Jr on December... View Obituary & Service Information

The family of Mildred Martin created this Life Tributes page to make it easy to share your memories.

Mildred E Martin a resident of Henryetta passed this life on...