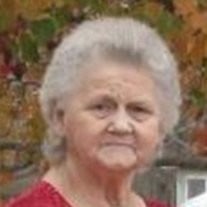 Louise G. (Hankins) Brazowski, a resident of Henryetta, died in Tulsa Sept. 7, 2013 at the age of 80. Louise was born May 22, 1933 to Floyd and Emma (Timmons) Hankins in Henryetta and married Willis Brazowski, Dec. 5, 1955 in Dewar. He preceded her in death March 19, 2011. They had two daughters, Doris and Sharon. She was a member of the Assembly of God. She retired after working as part of the dietary staff of the Henryetta Hospital. She was preceded in death by her husband Willis, her parents, and a sister Leona Pilgrim. Louise is survived by her two daughters, Doris Jones and husband Bruce Jones and Sharon Thomas and husband Richard Thomas, both of Henryetta; six grandchildren: Cheri Smith and husband Lennie of Oklahoma City, Bruce Jones and wife Tanya of Tulsa, Christie Renegar and husband Corey of Yukon, Scott Thomas, Tulsa, Stephanie Bonner and husband Hugh of Ada and Jason Thomas, Oklahoma City; 17 great-grandchildren, and two great-great grandchildren; her sister n laws, Wanda Caywood of Greenville, Texas and Dorothy of Maryland. Chapel service for Louise will be held in the Rogers Funeral Home Chapel on Tuesday, September 10, 2013 at 2 p.m. Interment will follow at the Westlawn Cemetery in Henryetta. The family of Louise Brazowski entrusted her care, services, and burial to Shawn Rogers of Rogers Funeral Home. The family of Louise will greet friends at the Rogers Funeral Home on Monday, September 9, from 6:00 p.m. until 8:00 p.m.

The family of Louise G. Brazowski created this Life Tributes page to make it easy to share your memories.

Send flowers to the Brazowski family.