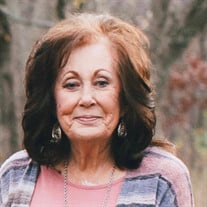 Loretta Sue Martin a former resident of Henryetta living in Silver City, NM, passed this life on April 21, 2021 in Silver City at the age of 83. Born March 19, 1938 in Kusa, Oklahoma to James and Pauline (Morgan) Dodds. She worked as a waitress/hostess... View Obituary & Service Information

The family of Loretta Sue Martin created this Life Tributes page to make it easy to share your memories.