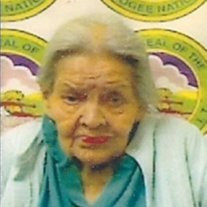 Lois Mae (Hicks) Harley a resident of Henryetta, Ok. Born December 5, 1922 in Okemah, Ok to Bunner Hicks and Bettie Simmons. Lois passed away on March 20, 2013 at the age of 90 years. She was the women’s leader at Hillabee Indian Baptist Church. Timmie Harley and Lois Harley were married on November 18, 1950 in Eufaula, Ok and celebrated 62 years of marriage. She was a homemaker. Her hobbies were sewing, quilting and singing Creek hymns. She loved to cook for her nieces and nephews or who ever came and visited her. Mother was quite but she got on to us if we did something, especially, Andrew. Her two grandsons were her first priority. Michael and Ronnie always asking for her, if they are doing okay or alright. Her parents, husband Tim and 12 brothers and sisters precede her in death. Survived by 2 daughters: Betty Marie Smith of Henryetta and Agnes Harley of Henryetta 2 Sons: Timothy Harley Jr of Henryetta and Henry Leon Harley of Henryetta 2 Grandsons: Ronnie and Michael Smith of Henryetta 2 great Grandsons: Shaun Smith and Nathaniel Ramires of Henryetta Son in law; Paul Smith of Okemah. Wake service will be Sunday evening from 6:00 pm to 8:00 pm at the Rogers Funeral Home Chapel Wake service Monday will be at Weogufka Church in Hanna, Ok from 7:00pm-9:00p, Service will be 2:00pm, Tuesday at Weogufka Indian Church. Interment will follow at the Hanna Cemetery under the direction of the Rogers Funeral Home. Pallbearers will be Ronnie Smith, Michael Smith, Wyatt Fixico, Wayne Tiger, Bunna Hicks and Roy Hicks Honorary Pallbearers: Robert Soloman, David “Speedy” Harley, Billy Ray Harley, Danny Harley, Amon Tiger and Noah Tiger Flower Girls: Bethany Soloman, Amber Fixico, Roberta Cooper, Lillian Fixico, Mary Ann Tiger, Peggy Ann Fixico and Annette Yargee

Lois Mae (Hicks) Harley a resident of Henryetta, Ok. Born December 5, 1922 in Okemah, Ok to Bunner Hicks and Bettie Simmons. Lois passed away on March 20, 2013 at the age of 90 years. She was the women’s leader at Hillabee Indian Baptist... View Obituary & Service Information

The family of Lois Harley created this Life Tributes page to make it easy to share your memories.

Send flowers to the Harley family.