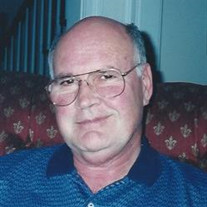 Lloyd Edwin Trimble, 81, of Dustin, Oklahoma, passed away peacefully at his home on Friday, April 21, 2017. Born in Holbrook, AZ to Bertha Neff and Walter Lowell Trimble. Lloyd lived most of his early years in Farmington, NM where he graduated from Farmington High School and married his sweetheart, Barbara JOAN Henry. Lloyd served in the US Air Force as a Russian Linguist in Shiroi, Japan before attending the University of Oklahoma where he received his PhD in Chemical Engineering. An industry publication once called him the world’s foremost expert on nonwoven textiles. He was both dedicated and driven. He began his career at DuPont and advanced to head Christina Labs at DuPont headquarters in Wilmington, DE. During his career, Lloyd served as Vice-President of Research and Development at Kimberly Clark and also at Fiberweb Nonwovens Corp. He was CEO at Trimble Consulting, Inc. and later at Superior Nonwovens. Upon retirement, Lloyd and Joan came back home to the Henry & Trimble Ranch in Dustin, OK. Lloyd volunteered a great deal of his time and energy to his church, Boy Scouts of America and community events. He enjoyed time with his family, gardening, fishing, traveling, following sports - especially watching OU football. He had a lifelong interest in archeology and loved all things western. Lloyd is survived by his wife of 62 years, Barbara JOAN Henry Trimble; daughter, Margaret Elaine Trimble of Dustin, OK; daughter, Valle Carol Trimble of Glendale, AZ; daughter, Jenifer Desmond Noblin and husband Greg of Norcross, GA; sister, Marie Gilje and husband Darrell of Farmington, NM; sister-in-law, Laura Mae Henry of Dustin, OK; grandchildren, Aaron Small, Seth Humphrey, Joe Humphrey, Stephanie Buell, Jessica Kerr, Rachel Newton, Lily Newton and 8 great-grandchildren. He is also survived by nephew Jerry Henry of Dustin, OK; nieces, Suzanne Henry and Cleo Henry of Dustin, OK; and Tina Roper of Aztec, NM. He was preceded in death by his parents; daughter, Debra Joan Trimble Humphrey; brother, Walter Louis Trimble of Aguila, AZ; and brother-in-law Charles Alva Henry of Dustin, OK. The family wishes to thank Heartland Hospice for helping their loved one spend his final days at home and for allowing them the time to accept and prepare. Funeral Service will be 10:00 am, Tuesday, April 25, 2017 at the Church of Jesus Christ of Latter-day Saints. Interment will follow at the Dustin Cemetery under the direction of the Rogers Funeral Home.

Lloyd Edwin Trimble, 81, of Dustin, Oklahoma, passed away peacefully at his home on Friday, April 21, 2017. Born in Holbrook, AZ to Bertha Neff and Walter Lowell Trimble. Lloyd lived most of his early years in Farmington, NM where he graduated... View Obituary & Service Information

The family of Lloyd Trimble created this Life Tributes page to make it easy to share your memories.

Send flowers to the Trimble family.