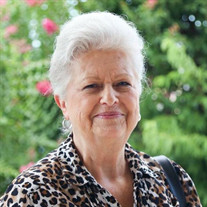 Linda Lee (Sweet) Pippin, age 78, of Henryetta, OK, passed away peacefully in her sleep on May 24, 2017, in Moore at her daughters house. Services will be held on May 27, at the Country Church of the Firstborn at 10:30 AM. Bro. Kerby Thompson will be officiating. Interment will be at the Westlawn Cemetery, Henryetta, OK. Services will be conducted by Rogers Funeral home. Linda Lee (Sweet) Pippin was born July 6, 1938, in Henryetta, OK. to Edgar Sweet and Helen (Taylor) Sweet. She was married to W.C. Pippin Jr. on February 2, 1957. To this union were born Rodney Kent, Russell Lane, Anita Gaylene Gordon, Kara Beth Tomlinson, and Jarrett Ryan. She is survived by her sons Rodney and Kathy Pippin of Bartlesville, Oklahoma and Jarrett and Amber Pippin of Henryetta. Her daughter Kara and Eddie Tomlinson of Moore, Oklahoma. Her grandchildren Elizabeth Featherston, Jennifer Anderson, Dustin Gordon, Amber Cole, Rusty Gordon, Mikayla and Ashlyn Tomlinson, Lexie Pippin, Levi Williams, and eight great-grandchildren. She is preceded in death by her parents Edgar Sweet, Helen Sweet, and Vera Sweet, Her husband W.C. Pippin, her son Russell, her daughter Gaylene Gordon and son-in-law Melvin Gordon, her brother Bill, and sister Betty. As a child she seen many of God's wondrous and picturesque sceneries, as she traveled and lived with her parents across this nation from Arkansas to the West Coast. She spent several of her teenage years around Tulare, California. She was baptized into the General Assembly & Church of the Firstborn by Bro. Dean Williams on November 29, 1953 in Tulare. When at the age of 18, she fell for the love of her life, W.C. Pippin Jr of Henryetta, Oklahoma. Life can be quirky and unusual at times. This was the case with the coincidence of W.C. and Linda's birthdays. While Linda was one day younger than W.C., his father Clarence Pippin was one day younger than her father, Edgar Sweet with both sets the same age of years. After W.C. proposed to Linda to be his wife, he sold his horse for $80 and sent the money to Linda for a bus ticket to come back to Henryetta. They were married by George Sweet of Welling, Oklahoma. They bought a furnished house where they began raising their family at 1409 West Trudgeon in Henryetta. To this union was born Rodney, Russell, Gaylene, Kara, and Jarrett. It was in approximately 1968, that they purchased 5 acres and a little farmhouse in the Buena Vista area on top of the hill in Henryetta. Then began the work of converting and adding onto a four room house, making it nearly twice as big and from a child's eye almost twice as tall. Linda was always a very clean, avid cook, canner, baker, and very caring and loving mother. It was there on that land where we children began to see and have an active role in working the garden. She always seen to it that we had strawberries, frozen jam, blackberry jelly, and pies from rhubarb and lemon to coconut cream and chocolate. Although we can't exactly say that we children did not complain about picking out the Bermuda grass out of the strawberries, we sure did love the end products. She was always clean and seen that we children had clean clothes and cleaned up after our excursions outside, she cleaned up our scrapes and bruises, and prayed for us many times when we were hurt, and sometimes pretty seriously. Even till her last days she worried about us. She was always a loving wife. There was one thing though that we children all noticed, that if we found out what any of our Christmas presents were, she might just take it back to the store and get something else. And she almost did. And we've heard her say that she liked to fish, but we never did see her fish. But man she loved to eat fish, and she would encourage you to go fishing. We think maybe she just didn't like the fishing part, but just the catching and the eating part. When Rodney and Rusty were small they had bunkbeds and they would take turns sleeping on the top bunk. this one particular night Rusty was sleeping on the top bunk and in the middle of the night mother got out of bed and rushed into the other end of the house and caught Rusty in mid air as he had fell out of the top bunk. The Spirit had told her to get in there immediately. Mother we love you and we will miss you, and we will see you, daddy and the rest of our family and our Lord. If we concentrate with our minds we might almost hear you singing with the Angels, love you. Family will receive friends at the Funeral Home, Friday evening from 6:00 to 8:00 pm Service will be 10:30 am, Saturday, May 27, 2017 at the General Assembly and Church of the First Born. Interment will follow at the Westlawn Cemetery under the direction of the Rogers Funeral Home.

Linda Lee (Sweet) Pippin, age 78, of Henryetta, OK, passed away peacefully in her sleep on May 24, 2017, in Moore at her daughters house. Services will be held on May 27, at the Country Church of the Firstborn at 10:30 AM. Bro. Kerby Thompson... View Obituary & Service Information

The family of Linda Lee Pippin created this Life Tributes page to make it easy to share your memories.

Send flowers to the Pippin family.