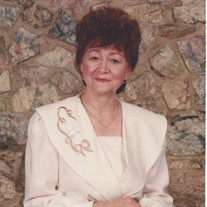 Mrs. Lillie Marie Henderson Clingan went to join the team of angels on January 20, 2018 in Henryetta at the age of 94. Lillie served in the British Army for 3 years during WWII. She then moved to the US in 1947. She was a member of the First Assembly of God here in Henryetta for over 60 years. She loved her animals as much as she loved her sons and grand kids which anyone that knows, that’s a lot. Through the years Lillie enjoyed playing her piano, singing and playing in her flowerbeds even after the grandchildren were grown, they would still crawl up in their Nana’s lap and get their ears done. Lillie never met a stranger, everyone was always welcome. Lillie’s favorite thing was spending time with her family and being with her animals. Lillie is preceded in death by her two husbands; Clearance Eugene Henderson and Ralph Garland Clingan. Her precious son Glen Ray Henderson and her parents Jimmy and Elizabeth Didwell. She is survived by her two sons; James Allen Henderson and Sara of Henryetta and Paul Henderson of Henryetta. Daughter; Patricia Morrison of Okmulgee. Two daughter in laws; Janie Henderson of Henryetta and Brenda Cellier of Henryetta. A very special life long friend; Shirley Marley of Texas. Nine Grandchildren; James, Brian Melissa Erin, Christina, Collin, Wayne, Jerold and Sherry Henderson. Eleven Great Grandchildren: Elizabeth Henderson, Michael & Dylan Henderson, Shelby Henderson, Kelli Brown, Jessi Henderson, Zalen Henderson, Christian Grey, Karma Trout, Miranda Looney, Crystal Alburtee. Two Great Great Grandchildren: Roen Hendserson and Cambrie Henderson Cousin Norman Didwell of England along with a host of nieces and nephews and friends who thought she was an angel here on earth, and loved her dearly. Lillie will be greatly missed but never forgotten. Funeral service will be 2:00 pm, Thursday, January 25, 2018 at the Rogers Funeral Home Chapel with Pastor Yandell, officiating. Interment will follow at the Westlawn Cemetery under the direction of the Rogers Funeral Home.

Mrs. Lillie Marie Henderson Clingan went to join the team of angels on January 20, 2018 in Henryetta at the age of 94. Lillie served in the British Army for 3 years during WWII. She then moved to the US in 1947. She was a member of the First... View Obituary & Service Information

The family of Lillie M Clingan created this Life Tributes page to make it easy to share your memories.

Send flowers to the Clingan family.