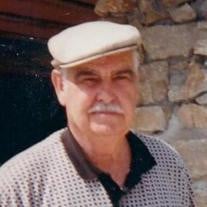 Billie Leon Williams a resident of Checotah Oklahoma, passed away at his home on August 28, 2011, at the age of 81 yrs old. He was born July 29, 1930 to Billy and Harriette Williams in Custer City, Oklahoma. He was baptized into the General Assembly of the Church of the Firstborn on July 15, 1958. He married the love of his life, Ramona Jeanne Deffenbaugh on August 8, 1958 in Oklahoma City, Oklahoma by Bro. Harold Penry. He was ordained as a bishop in Checotah, Oklahoma on August 9, 1975. He was a avid reader. He spent many late nights reading the bible. One of his greatest joys was traveling amongst the brethern and having them in their home. He took several trips to Winchester, TN, to preach the gospel to his family. He would preach in homes and under arbors. Along with Bro. Bunk Sloate, he started the church in Weatherford, Oklahoma. When his children were very young, he made sure he taught them how to pray. There was a time, the family dog got run over, and he carried the dog into the house and had his children gather around and pray for it. He was adamant about trusting in God for everything and that God should be number one in their lives. He loved the outdoors and took great pride in landscaping his yard. He was a very hard worker and never missed work. He taught his children to be hard workers too. He was a very nurturing parent when his children were sick. He is preceded in death by his wife Ramona Williams and his first wife, Idel Williams, and grandson,Kameron Holman. Brothers, Kenneth and Bud Williams, sisters, Faye Jones, and Darlene Miller. He is survived by seven children; LaDonna Beavers, of Tucson, Arizona, Vickie Thompson, of Henryetta, Oklahoma, Gail Beavers, of Tulare, California, Donnie Wright of Gosport, Indiana, Lanny Williams, of Checotah, Oklahoma, Rhonda Thomas of Hobbs, New Mexico, and Dana Holman of Oklahoma City, Oklahoma. Also, 15 grandchildren and 10 great-grandchildren. His brothers, John and Roy Williams, and sisters Fern Winslow and Wanda Klimek. Service will be 10:00 am, Thursday, September 1, 2011 at the Rogers Funeral home Chapel with Brother Allen Moss, officiating. Interment will be at 3:00 pm at the Parkland Cemetery in Agra, Ok under the direction of the Rogers Funeral Home.

Billie Leon Williams a resident of Checotah Oklahoma, passed away at his home on August 28, 2011, at the age of 81 yrs old. He was born July 29, 1930 to Billy and Harriette Williams in Custer City, Oklahoma. He was baptized into the General... View Obituary & Service Information

The family of Leon Williams created this Life Tributes page to make it easy to share your memories.

Send flowers to the Williams family.