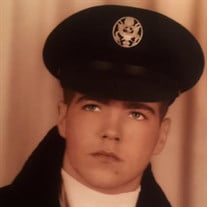 Larry James Vercelli peacefully went to his heavenly home at 6:45 a.m. Friday, November 6th at Carl Hayden Veterans Hospital in Phoenix Arizona. His diagnosis was confirmed that he had stage 4 cancer just 2 days prior. Larry was born on March 14, 1952 in Henryetta, Oklahoma to August and Billie Vercelli. Larry brought much joy to his Mom, Dad and sister Judi from the day he was born. He was bright and loving with a gentle spirit and a heart as big as Texas. The family grew when Cindy was born fifteen months later and fifteen years later Jeff arrived. As a little boy, when the family gathered around the bed for family prayer time, Larry would pray fervent and long prayers, resulting in some of the siblings falling asleep before his prayers were completed. Larry attended Jefferson Elementary, Henryetta Junior High and Henryetta High School. He made all conference and all district as a lineman for the Henryetta Hens. He was a bright student and excelled at science and math. After high school. Larry joined the Air Force where he served at Tinker Air force base as an administrative specialist during the Vietnam era. After an honorable discharge from the Air Force, Larry worked as a sales manager for car dealerships in Oklahoma City until he went to work for the US postal service in 1984 in a variety of positions. He was a member of the APWU and director of the clerk craft. He then became a supervisor at the Norman Post Office until 1994. He then returned to working at a car dealership in Oklahoma city until his retirement. Larry loved God, his family, golf, University of Oklahoma football, and making his famous lasagna, not necessarily in that order! Larry's health declined about 15 years ago and he became disabled. In 2009, Larry moved to Henryetta when his Mom was diagnosed with cancer to help take care of her and his Dad. After his Mother's death in 2010, he continued to live with and faithfully take care of his Dad. Larry's Parkinson's disease was progressing and in June of 2015, he and his Dad moved to Arizona to live with his sister Judi and her husband Dan. He could no longer drive a car but had a golf cart that he loved driving to the Country Club and having breakfast. In his charming manner, he won the affection of the servers who would help him cut up his food and make sure that he was well taken care of in style. Larry had trouble sleeping for the last several months. He would sit on the porch in the early mornings, chatting with walkers and runners, taking pictures of the rabbits that came into the yard and the occasional coyote that would stroll down the street. Larry maintained a positive attitude and brought joy to all of his family with his generous and caring nature. On November 3rd, Larry's diagnosis with stage 4 cancer in his liver, lungs, and adrenal glands was confirmed. He was told that with chemotherapy, he could possibly live for 8 months. Then two days later, after a Pet scan he was told that the cancer had spread everywhere in his body, but the treatment was not changed. On November 5th, he had his first round of chemotherapy. After visiting with his cousin Michael, who was visiting from Oklahoma, he checked to see what channel the OU game was going to be on that Saturday. His sister Judi spent the night in his room with him. They went to sleep at about 10:00. Larry woke up at 4:00 a.m. with a lot of pain and difficulty breathing. At 6:35, he peacefully left all of his pain and suffering and entered into Glory. After Larry was diagnosed, he talked openly about what he knew was pending death unless God chose to miracously cure him. He had many conversations with the chaplain, his sister, and brother-in-law about death and heaven. He had no doubt where he was going, but what he was most sad about was knowing that he could not make the trip to Oklahoma to see his children and grandchildren for Christmas. He spent his last few days making phone calls to family and friends to let them know that he loved them. For those that he didn't get to talk with, his family wants you to know that he loved all of you and was thankful for the family and friends that God put in his life. Larry requested that his service be a time of celebration and fellowship. He will be greatly missed, but we will forever cherish the memories of his kindness, sense of humor, interesting conversations and his big bear hugs. Larry was preceded in death by his Mother Billie Vercelli and many loved ones. Larry is survived by his Dad, August Vercelli; three children, Heather Hamilton and husband Chad, daughter Shelly Chapman, son Corey Vercelli; six grandchildren; Kenzie, Sadie, Connor, Brooklyn, Addison and Bryan; brother Jeff Vercelli and wife Dawn; sister Cindy Tyler and husband Kenny, and sister Judi Hedstrom and husband Dan; many aunts, uncles, nieces, nephews, cousins and a multitude of friends. A celebration of life service will be held on Friday, November 13th at 2:00 p.m. at the Nazarene Church in Henryetta, Oklahoma at 8th and Trudgeon. Internment will follow immediately at West Lawn Cemetery. Military honors will be conducted by the United States Air Force. Memorials may be made to Prodigal Sons and Daughters, Inc.; PO Box 3303; Turlock, California 95380 Peace to his memory until we see him again!

Larry James Vercelli peacefully went to his heavenly home at 6:45 a.m. Friday, November 6th at Carl Hayden Veterans Hospital in Phoenix Arizona. His diagnosis was confirmed that he had stage 4 cancer just 2 days prior. Larry was born on March... View Obituary & Service Information

The family of Larry Vercelli created this Life Tributes page to make it easy to share your memories.

Larry James Vercelli peacefully went to his heavenly home at...

Send flowers to the Vercelli family.