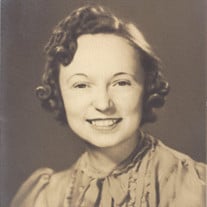 Katharyn Jean Smith, a long time resident of Henryetta, died peacefully in her sleep on September 9th, 2014 at the age of 100. Born August 26, 1914 in Omega, Oklahoma to Ewing Arthur Forth and Katharyn Elizabeth Forth. Growing up she would live in Custer City, Weatherford, Butler, and several other Western Oklahoma cities. The family finally moved to Oklahoma City, where she graduated from Capitol Hill High School, in 1932. Katharyn Jean attended Southwestern State University. Returning to Oklahoma City, she was employed in the State Department of Education. For several years she sang in the quartette known as The Four Notes, as well as the Clark Snell Studio Singers. She attended First Baptist Church of Oklahoma City and was active in the young adult class. It was there she met Ernest Smith. A young attorney from Henryetta, Ok, who was just starting his legal career in Oklahoma City. In 1941 Ernest was called into military service. After boot camp he became an instructor in the Officers Candidate Preparatory School. On December 27, 1942 Katharyn and Ernest were married at the First Baptist Church of Oklahoma City. In 1943 Major Smith was sent to Europe as an Intelligence Officer for General Patton’s 3rd Army. Upon his return in the summer of 1945 they settled in Oklahoma City. On May 16th, 1946 their first son Stephen West Smith was born. In October of 1947 they received the tragic news that Ernest’s father, E W Smith Sr. had died of a massive heart attack. During the days following his father’s death several men came and urged him to come and continue his dad’s law practice. After a family conference, it was agreed that Ernest and Katharyn Jean would move their family to Henryetta. On April 12th, 1949 their second son Donald Lee Smith was born. Katharyn lived a life of service to others. She was involved in all activities of the First Baptist Church of Henryetta. She taught Sunday School for over 50 years. For 15 years she directed the Vacation Bible School. Her love and commitment to her church and church family was a true testament of her love for the Lord. As her sons grew up she was busy with all their activities. When they got active in Scouts, she became a Den Mother. When Stephen started football she became a Football Mother. When Donnie joined the Band, she became active as a Band Parent. She continued her support of the family by following all the activities of her grandchildren whenever she could. She served on Boards for, Henryetta Library, Henryetta Art Association and Historical Board. She was also an active member of the Henryetta Medical Auxiliary, ‘Pink Ladies’, and served hundreds of hours volunteering at the Henryetta Hospital. For over 25 years she and Ernest chaired the Lions Club Community Christmas Basket Program. Katharyn was in charge of the toys to go with the food baskets. She was a member the Ithana Club. She had a special place in her heart for the P.E.O. Sisterhood. She started in the local chapter and interest grew to State committees and finally serving as State President for the 1978-79 term. This association took her to every chapter in the State and National Conventions across the Country. In 1988, The Henryetta Daily Free-Lance named her “Henryettan of the Year” for her service to the community. Katharyn was preceded in death by her parents, Ernest, her husband of 59 years, son Stephen W Smith and one brother John “Jack” Forth. She is survived by one son Donnie Smith and wife Lou Ann of Henryetta. Daughter-In-law Marsha Smith Doak of Henryetta, sister-in-law Jane Forth of Oklahoma City. Grandchildren: Bridgette and Natalie Smith of Henryetta. David Smith and wife Sheila of Houston, Stephanie Kissman of Tulsa, Amy Smith-Holt and husband Wade of Newcastle, Ok, and their mother Beverly Smith of Tulsa. Great Grandchildren: Caitlin and Rebekah Smith of Houston, Madison,Noah, Lyric, Ethan, and Rylee Kissman of Tulsa, and Kaden, Nate, And Gavin Holt of Newcastle. Nieces: Debbie and Terri Forth, Susan Stuart, and Sally Smith. Nephew: Keith Smith. Also, the many caring employees and friends of the Fountain View Nursing Home and Heritage Hospice. Funeral service is scheduled for 2:00pm, Friday, September 12, 2014 at the Henryetta First Baptist Church with Rev. Jim Paslay, officiating. Interment will follow at the Westlawn Cemetery under the direction of the Rogers Funeral Home. Family will be receiving friends at the Funeral Home Thursday evening from 6:00 to 8:00pm.

Katharyn Jean Smith, a long time resident of Henryetta, died peacefully in her sleep on September 9th, 2014 at the age of 100. Born August 26, 1914 in Omega, Oklahoma to Ewing Arthur Forth and Katharyn Elizabeth Forth. Growing up she would... View Obituary & Service Information

The family of Katharyn Jean Smith created this Life Tributes page to make it easy to share your memories.