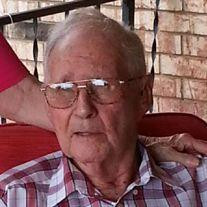 Visitation Monday, July 13th, 2015 - 01:00 PM to 07:00 PM - Corbett Funeral & Cremation 807 W Wilshire Blvd - Oklahoma City, OK - 73116 Funeral Service Tuesday, July 14th, 2015 - 10:00 AM - Britton Baptist Church 1141 W Britton Rd - Oklahoma City, OK - 73114 Graveside Service with Military Honors Tuesday, July 14th, 2015 - 2:00 PM - Hillcrest Cemetery Weleetka, OK Joseph Douglas Whitlock, of Oklahoma City, died peacefully at Integris Baptist Hospital on July 9th, 2015. He was 93 years old. He is survived by his brother, Davis Whitlock, of Henrietta, OK; his two children, Barbara Higgins and Ron Whitlock, both of Oklahoma City; his four grandchildren, Joey Higgins of Edmond, OK, Sheri Higgins, Esq., of Dallas, TX, Nicholas Whitlock of Denton, TX, and Jennifer Whitlock of Oklahoma City; his five great-grandchildren, Airman Tyler Higgins, Zachary Higgins, Kristina Rayl, Evan Whitlock, and Cameron Whitlock; and numerous nieces and nephews. Joe was born on June 10th, 1922, in Russelville, AL, to Arthur and Gertrude Whitlock. Joe enlisted in the Army in September 1942 and served in combat in the 134th Infantry Regiment. He served 15 months fighting in the European Theater as a machine gunner and a supply truck driver. During his time, he earned a Bronze Star, a Good Conduct Medal, an EAME Campaign Medal with one Silver Service Star, a WWII Victory Medal, a Combat Infantryman Badge 1st Award, and an Honorable Service Lapel Button. Joe also earned two Purple Hearts (one with a Bronze Oak Leaf Cluster) after receiving wounds during the battles of St. Lo and Mortain in France. While driving a supply truck, Joe had the honor of expressing his frustrations about trying to change a flat tire in the mud to Gen. George S. Patton, whom he served under. After returning from the war, he met his wife Vi Grooms. They married on New Year’s Day, 1948, and enjoyed a long, prosperous, and loving marriage for 67 years. Joe and Vi moved to Oklahoma City where he worked as a homebuilder. Joe eventually started his own plumbing company, Jiffy Plumbing, where he proudly served the Oklahoma City community for over 45 years. Their daughter, Barbara, managed Joe’s plumbing company for many years. Their son, Ron, followed in his father’s footsteps by serving in the Army during the Vietnam War. Joe and Vi were also very active in their church, where Joe served as a Deacon. Joe was a hard worker in every aspect of his life- from growing his business to providing for his family. Joe had a profound impact on many people and was loved by all his family and friends, having an especially close relationship with his grandchildren and great-grandchildren, whom he adored and mentored. He was characterized as being innovative, caring, and extremely generous. Joe was passionate about making his home with Vi beautiful--from planting rose bushes for her to building her a new summer patio--and he loved fixing things around the house. He continued to do both until he died. Joe’s lifelong motto was, “You don’t ever give up.” He exemplified that tenacity during the battle of St. Lo in 1944; later in life when responding to plumbing emergencies at any hour of any day “in a Jiffy;” and even later when surviving multiple major health threats to persevere for his family. Despite adversity, he was witty and humorous, and bent on making his family and friends laugh. Services will be held on Tuesday, July 14th, at 10 a.m. at Britton Road Baptist Church. Burial will be held at Hillcrest Cemetery, Hwy. 75 and 4th St., Weleetka, at 2 p.m under the direction of the Rogers Funeral Home. .All are welcome to come and celebrate Joe’s long and fruitful life. Flowers and condolences can be sent to the funeral home or Britton Road Baptist Church, 1141 W. Britton Rd., Oklahoma City, 73114.

The family of Joseph D. Whitlock created this Life Tributes page to make it easy to share your memories.

Send flowers to the Whitlock family.