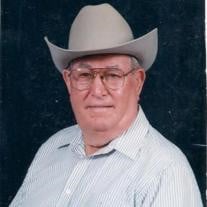 John Julius "J.J." Smith was born on May 13,1922 west of Hanna, Oklahoma to John Henry and Martha Susan (Coffey)Smith. He peacefully departed this world to be with his Lord on April 6, 2012 at his home in Dustin, Oklahoma. The Smith family moved to the Dustin area, when Julius was about eight years old, where he was a lifelong rancher. J. J. became a member of the First Baptist Church of Dustin when he was a small child and continued as a lifelong member. He raised cattle and horses and always enjoyed breaking all his own horses for riding and working the ranch, which he greatly loved. In 1987, he retired from the Indian Nation Turnpike, which gave him more time to spend with his adored family and tending his cattle with his wife, Maggie. Several years later he sold the ranch and his cattle, retiring a second time . Julius served his community as the Mayor of Dustin twice, the first time in the early 1970's and then again in 2001, as he loved his home town. On April 7, 1977, Julius married his soul mate, Maggie Hill in Shennan, Texas. Julius raised seven children: four biological and three step-children, which he reared as his own. He loved his immediate family and extended family very much and will be fondly remembered as a very loving father and husband. Julius is preceded in death by his parents John and Susie Smith; one brother, Leon Smith; three grandsons, John Maddox, Julius Deon Hill, and Christopher Hill. He is survived by his wife, Maggie Smith of the home, children; Linda Maddox and husband Jim of Weleetka, Ok.; Don Smith and wife Ginger of Broken Arrow, Ok; Gary Smith and wife Oletta of Enid, OK; Shirley Mills and husband Jackie of Lamar, OK; Lloyd (Pete) Hill and wife Susan of Henryetta, OK; Chrystal Hill and husband Mark of Eufaula, OK; and Sherry Hill and husband Randy Bevan of Tomball, Texas. Sisters: Lillian (Lilly)Gray of Indianola, OK; Agnes Keathley of Tulsa, OK; Rosalou Henry of Alvin, Texas; thirteen grandkids; twenty great-grandkids; one great-great granddaughter; numerous nieces and nephews and friends; as well as a very special sister-in-law, Sandi Crawford. Pallbearers will be his beloved grandsons: Erick Maddox, Brent Smith, Randy Smith, Brandon Mills, Brian Hill, Phillip Hill and nephew, Rusty Wallace. Honorary pallbearers are: long-time friend, Bill Mason and Ronnie Sanders. Service will be 2:00pm, Monday, April 9, 2012 at the Dustin First Baptist Church with Rev. Randy Zinn, officiating. Interment will follow at the Dustin Cemetery under the direction of the Rogers Funeral Home.

John Julius "J.J." Smith was born on May 13,1922 west of Hanna, Oklahoma to John Henry and Martha Susan (Coffey)Smith. He peacefully departed this world to be with his Lord on April 6, 2012 at his home in Dustin, Oklahoma. The Smith family moved... View Obituary & Service Information

The family of John Smith created this Life Tributes page to make it easy to share your memories.