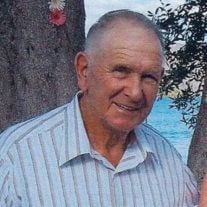 John “Jack” Campbell a resident of Hanna passed away on February 4, 2014 in Hanna, Ok at the age of 85. Jack’s story Began on January 6, 1929 at the Wildcat Ranch near Kelseyville, CA. The 8th of 9 children born to Chester and Mary (Shields) Campbell, he began his life from very humble beginnings. A man of true grit, Jack went to work at an early age to support his family. A logger by trade, he harvested timber from the majestic woods of Northern, California. He began his own corporation John A. Campbell Construction in Lakeport CA, Eventually relocating to the remote valley of Covelo, CA. At the height of his career, he supplied jobs to over 100 employees. He married Claudena Hyder on June 25th, 1951 in Reno, NV. His partner in love and life, they raised 4 children spending many long summers in the woods. Jack expanded his business savviness to the cattle industry which eventually prompted him to relocate to the state of Oklahoma in 2000 where he owned and operated the Campbell Ranch in Hanna, OK. Jack is preceded in death by his parents, wife Claudena, 3 brothers and 5 sisters. Survived By: Children: Richard and Jennifer Campbell of Fitzhugh, Ok, John Campbell of Hanna, Christi and Gregg Arnold of Hanna and Susan Campbell of Hanna. 11 Grandchildren and 11 Great Grandchildren Nieces: Peggy Campbell of Lake Port, CA, Pam Jones of Upper Lake, CA and Penny Esteves of Applegate, CA Memorial can be made to the Hanna Fire Department, PO Box 186, Hanna,Ok 74845. Funeral Service will be 11:00 am, Friday, February 7, 2014 at the Rogers Funeral Home Chapel. Interment will be at the Campbell Family Ranch Cemetery.

The family of John "JACK" Campbell created this Life Tributes page to make it easy to share your memories.

John “Jack” Campbell a resident of Hanna passed away on February...

Send flowers to the Campbell family.