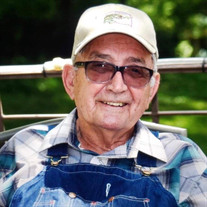 James D Jones was born on May 3, 1937 in Pharoah, Ok to James and Lena Mae Jones. He passed this life on November 11, 2020 in Yukon, Ok at the age of 83. While attending Dustin High School, he met the love of his life, Collene Morrison, whom he married at the age of 17. James served 20 years in the military in both US Navy and US Air Force before retiring. After his service, he returned to Okmulgee ,OK where he graduated from Oklahoma State University, Okmulgee Tech. Thereafter, he went to work as the Plant Maintenance Manager for Kelco, Okmulgee, Ok for 15 years. Upon retiring from Kelco, James and Collene moved back to the family farm in Dustin where they made their home for 20 years. James enjoyed gathering on the farm with family and friends. He was an active member in his community serving as a Deacon of the Dustin Baptist Church. He was also a member of the local Water Board, Masonic Lodge and VFW. In addition to serving on the Dustin School Board, James and Collene provided yearly scholarships to graduates of Dustin High School. He was immensely proud of his family especially his grandsons, Bryan, Robbie and Charles. After selling the farm, James and Collene moved to Yukon, OK in 2011 where he became a member of Stable Rock Baptist Church. James is survived by his daughters, Vicki Beals and her husband Bobby Beals, Watonga, OK; Robin Phillips and her husband, Robert Phillips, Bartlesville, Oklahoma; grandsons, Bryan Beals and his wife, Jenny Beals, Lincoln , Nebraska; Robbie Crosier and his wife Mallory Crosier, Edmond, OK; Charles Beals and his wife, Elizabeth Beals, Shawnee, Kansas; great grandchildren, Brooklyn Beals, Emily Beals, Alexia Beals, Cora Crosier, Reid Crosier, and Lucas Beals; brother, Billy Jones, Springfield, Oregon; and sister, Lana McCalip of Washington, OK. He was preceded in death by his parents, James and Lena Jones; wife of 61 years, Collene Jones; brother, Charles Jones; sisters, Anna Gordon, Patty Masengale and Karen Kindred. Memorials can be made to the Wounded Warriors Project 4899 Belfort Road Suite 300,Jacksonville, FL 32256, in memory of James Jones. Graveside service will be 2:00 pm, Monday, November 16, 2020 at the Hillcrest Cemetery, Weleetka, Ok with Rev. Dale Huckabay, officiating. Services are under the direction of the Rogers Funeral Home.

James D Jones was born on May 3, 1937 in Pharoah, Ok to James and Lena Mae Jones. He passed this life on November 11, 2020 in Yukon, Ok at the age of 83. While attending Dustin High School, he met the love of his life, Collene Morrison, whom... View Obituary & Service Information

The family of James D. Jones created this Life Tributes page to make it easy to share your memories.

Send flowers to the Jones family.