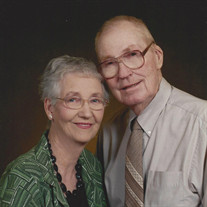 Jackie Gillispie, a resident of Henryetta, passed away in Tulsa, Oklahoma, at the age of 86 on June 14, 2016. Jackie was born January 25, 1930, in Big Spring, Texas to Thomas and Ruby Gillispie. On June 23, 1955, Jackie married Marguerite McGill, the daughter of Mr. and Mrs. Roy McGill of Seminole, TX. They were 9 days shy of celebrating their 61st anniversary. Jackie was a proud Marine veteran, serving his country in Korea. In 2014, Jackie and his daughter took the Oklahoma Honor Flight to Washington, DC, to tour and view the military landmarks. He considered this to be a highlight of his life. Jackie worked for the Halliburton Oil Field Services as an oil field supervisor, retiring after 30 years of service. During his stint with Halliburton, Jackie and Marguerite resided in Columbia, South America, for 17 months. After his retirement from Halliburton, Jackie and his son opened and operated Lone Star Tanks. After retiring from Lone Star Tanks in 1991, Jackie and Marguerite began ranching about 2100 acres around Hanna, Oklahoma, eventually retiring to Henryetta in 1998. After relocating to Ennis, TX, and Stillwater, OK, they returned to Henryetta in early 2016. Jackie is survived by his wife and best friend, Marguerite, of the home. Eldest son: Jackie Don Gillispie, and wife, Cheryl, of Andrews, TX. Youngest son: Bob Gillispie, and wife Jana, and their family, Jamie, Jacob, Tyler, McKenzie, and Madison Dalworth, of Ferris, TX. Daughter: Janna Duggan, and friend, Richard Cox, of Henryetta, OK. Son-in-law: Kenny Duggan of Midland, TX. Daughter-in-law: Pat Cheel, of Waco, TX. Granddaughter: Ericka Carter, her husband, Bill, and daughter, Madeline, of Henryetta, OK. Granddaughter: Stacey Splawn and husband, David, and their children, Parker, Jack, Sam & Clark, of Marshall, TX. Grandson: Kelly Max Duggan of New York City, NY. Granddaughter: Lauren Gudgel and husband, Richard, and daughter, Amelia (due to arrive August 2016), of Midland, TX. Jackie was preceded in death by his parents, sister and brother-in-law, Maxine and Eldon Sanders, and his beloved four-legged companion, Cowboy Rufus. Graveside services with military honors for Jackie will be held on June 18, 2016 at 2:00 P.M. at the Westlawn Cemetery in Henryetta, Oklahoma, under the direction of Rogers Funeral Home.

Jackie Gillispie, a resident of Henryetta, passed away in Tulsa, Oklahoma, at the age of 86 on June 14, 2016. Jackie was born January 25, 1930, in Big Spring, Texas to Thomas and Ruby Gillispie. On June 23, 1955, Jackie married Marguerite McGill,... View Obituary & Service Information

The family of Jackie Gillispie created this Life Tributes page to make it easy to share your memories.

Jackie Gillispie, a resident of Henryetta, passed away in Tulsa,...

Send flowers to the Gillispie family.