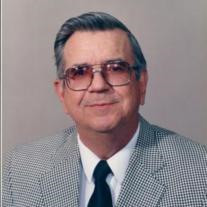 George William Christy left this earth to receive his gift of eternal life from his Lord Jesus Christ on May 23, 2011, at the age of 69. He was born in Henryetta, OK, to Fred Robert Christy and Delphia (Fite) Christy. He was preceded in death by his parents; his stepmother, Helen (Baird, Christy) Barber; and a brother Gerald Lee Christy. His family left behind - waiting to join him in heaven include his wife LaDana (Saunders) Christy of their home near Schulter, OK; children Randall & Susie Christy, Steven & Connie Christy; Sharla and David Frederick; grandchildren Randi & Adam Hall, Lynette & Josh Howk, Kelsea & Tyrel Jones, Clark Christy, A. J. Christy, Jill Christy, Paul Christy, Wesley Frederick, and Crystal Frederick; his brother Robert Christy and wife Karen, and his sister-in-law Carolyn Christy and mother-in-law Margie Saunders. George began his life-long ministry when he was fifteen years old. He pastored at Natura Baptist Church, Carson Baptist Church, Preston Baptist Church, and Schulter Baptist Church. At the time of his death he had pastored the Schulter Baptist Church for 36 years. George has performed many weddings of church members, students, and friends, and he has ministered to many families through the years by preaching funerals of their loved ones. George was a positive influence in the lives of many students through his thirty-two years in education. He was principal, coach, and teacher at Schulter, Graham, and Wilson public schools, and served as Elementary Principal at Henryetta School. In addition to academics, coaching, and discipline, he is rememebered by many students for his support and encouragement and for his jokes and sense of humor. Also, he served on the Green Country Technology Center School Board for nineteen years. George enjoyed hunting, fishing, golf, watching the Yankees and the Sooners, going to cattle auctions, being with family, and visiting with friends. He belonged to the Henryetta Country Club, Okmulgee County Cattleman's Association, and Oklahoma Cattlemen's Association. George will be missed by the many people he loved and who loved him. Services will be 2:00 pm, Friday, May 27, 2011 at the Okmulgee First Baptist Church. Interment will follow at the Salt Creek Cemetery under the direction of the Rogers Funeral Home Family will be receiving friends at the Rogers Funeral Home Thursday evening from 6:00 to 8:00 pm Memorials can be made to the Gospel Station, PO Box 1343, Ada, OK 74821 in Memory of George Christy

George William Christy left this earth to receive his gift of eternal life from his Lord Jesus Christ on May 23, 2011, at the age of 69. He was born in Henryetta, OK, to Fred Robert Christy and Delphia (Fite) Christy. He was preceded in... View Obituary & Service Information

The family of Rev George Christy created this Life Tributes page to make it easy to share your memories.

George William Christy left this earth to receive his gift of...

Send flowers to the Christy family.