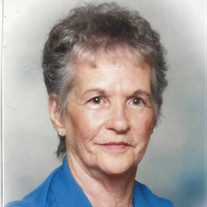 Fern Louise Gardner a resident of Henryetta passed this life on January 30, 2017 in Henryetta at the age of 76. Born May 19, 1941 in Tulare, CA to Floyd and Esther (Hickman) Gardner. She worked as a care giver and attended the First Christian... View Obituary & Service Information

The family of Fern Gardner created this Life Tributes page to make it easy to share your memories.

Fern Louise Gardner a resident of Henryetta passed this life...

Send flowers to the Gardner family.