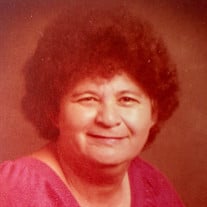 Eva Lee Peterson (maiden name, Davis), 80, of Henryetta went to be with her Creator July 31, 2014, at 11:55 pm, at Fountain View Manor after a brief battle with lung cancer. Eva was born May 11, 1934, on Tiger Mountain to Lillie (Wills) and Kenneth Davis. Eva was a life long resident of Henryetta. She had a servant's heart, having worked 30+ years at Fountain View Manor nursing home as a CNA and CMA. Eva left school after the 8th grade when she was married Alvie McKay at 14. One of her proudest accomplishments was earning her GED at 49 years old. Eva married John Peterson in 1966. She was the funny, loyal, and adventurous mother of eight, grandmother of 16. Most of all, Eva was an amazing daughter who loved taking care of her mother. Eva is preceded in death by her mother and father, her husband, John Peterson, long-time companion, Ned Duncan, first husband, Alvie McKay, daughter, Geneva McKay, son, Gary Peterson, and daughter-in-law, Cindy McKay. She is survived by six children and spouses: Dale (Connie) McKay, Wayne (Sheri) McKay, Donnie McKay, Steve (Jody) McKay, Treva (Danny) Treesh, and Dwanna (Steve) Robertson, and a grand-daughter raised as a daughter, Dena Costello, and her fur-baby, Buddy. She is also survived by her sisters, Wanda Cantrell and Maggie Holman, and closest cousin, Curt (Gerry) Russell, numerous great-grandchildren, nieces, nephews, other cousins, and other extended family and lots of beloved friends. Family will be receiving friends at Rogers Funeral Home, Sunday evening from 5:00-8:00 pm. Funeral Service will be 10:30 am, Monday, August 4, 2014 at the Dewar First Baptist Church. Interment will follow at the Lackey Cemetery under the direction of the Rogers Funeral Home. LUNCHEON FOLLOWING AT AMERICAN LEGION IN HENRYETTA 508 E FRISCO AVE

The family of Eva Lee Peterson created this Life Tributes page to make it easy to share your memories.

Send flowers to the Peterson family.