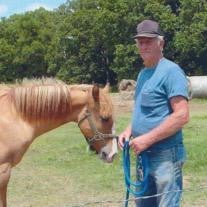 Edwin F Barrett a resident of rural Henryetta passed away on December 15, 2012 at his home. Born January 12, 1938 in Henryetta, Ok to Arley and Gladola (Davis) Barrett. Edwin married Kathy Crawley in 1958. They were members of the Salem Baptist... View Obituary & Service Information

The family of Edwin Barrett created this Life Tributes page to make it easy to share your memories.

Edwin F Barrett a resident of rural Henryetta passed away on...

Send flowers to the Barrett family.