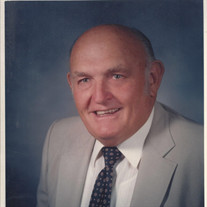 Durward Duane Chancey, better known as "D.D", resident of Bryant, Ok passed away September 18, 2018 in Henryetta, Oklahoma at the age of 86. Born May 26, 1932 in Bryant, Oklahoma to Henry Jackson Chancey and Sybil Alice (Jones) Chancey. He is preceded in death by his parents H.J. Chancey and Sybil Chancey and wife of 20 years Florene Alice Chancey. He is survived by Two sons, Dusty Chancey of the Bryant Community, Devin Chancey & wife Beverly of the Bryant Community Six Grandchildren, Misty Reece & Husband Anthony of Plano, Texas, Mindy Johnson & Husband Mark of the Bryant Community, Denton Chancey & wife Courtney of Edmond, Oklahoma, D. Dalton Chancey & wife Cassie of Johnson, Oklahoma, Drew Chancey & wife Brittney of Glenpool, Oklahoma, Aimee Chancey & partner Damon Mouss of Henryetta, Oklahoma. Eight Great-Grandchildren, Jase Johnson, Lane Johnson, Cora Chancey, Graham Chancey, Eleanor Chancey, Elizabeth Moser, Olivia Moser and John Chancey and longtime friends Dale and Kathryn Turner of Holdenville, Oklahoma, as well as a host of friends and other relatives. He remained a lifelong resident of Bryant, Oklahoma except for an eight year period Coaching in Ivanhoe, Texas and one year at Stidham, Oklahoma. He began his 31 year career as employee of Graham Public School in 1964 serving first as Social Studies Teacher and Coach then assuming the position of Principal and finally Superintendent. A position he held for the next 24 years, retiring in 1995. He participated in the growth and development of thousands of students over a career lasting 41 years, as a strict disciplinarian, many of those students are familiar with his 3 questions; "Who's in the wrong? Who can correct it? And Who's going to correct it if you don't?" Most of the time the student would help correct their own behavior. One of the life lessons he tried to teach was Honesty. After becoming superintendent he retired from coaching, but in 1989 and continuing thru 1992 he coached the Graham High School girls through 3 very successful seasons as a state ranked team each year. In 1977 he followed one of his dreams of becoming an Auctioneer and Real Estate Agent. But people who knew him knew his true lifelong passion, beginning in childhood, was that of a cowboy and cattleman. True to his nature as a man who achievied his goals he was a very successful; fullfilling his dreams of owning a Cattle Ranch. Pallbearers wil be Dusty Chancey, Devin Chancey, Denton Chancey, D. Dalton Chancey, Drew Chancey, Mark Johnson. Honorary pall bearers will be Dale Turner, Bob Cunningham, Phil Agee, Don Smith, Jack Pangle, Robert Sutterfield, Stan White, James Mankin, Damon Mouss Family will be greeting friends Sunday Evening, September 23 from 4:00 pm to 6:00 pm. Funeral Service will be 10:00 am, Monday, September 24th, at the Henryetta First Baptist Church with Rev. Robert Hunnicutt, officiating. Interment will follow at the Hillcrest Cemetery in Weleetka under the direction of the Rogers Funeral Home.

Durward Duane Chancey, better known as "D.D", resident of Bryant, Ok passed away September 18, 2018 in Henryetta, Oklahoma at the age of 86. Born May 26, 1932 in Bryant, Oklahoma to Henry Jackson Chancey and Sybil Alice (Jones) Chancey. He is... View Obituary & Service Information

The family of Durward D Chancey created this Life Tributes page to make it easy to share your memories.

Send flowers to the Chancey family.