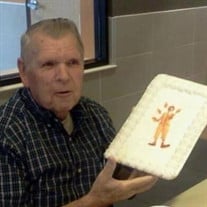 Doyal Gene Pickel went to be with the Lord on the morning of November 12, 2021 at 85 years old. Doyal was born on July 6,1936 in Henryetta, Ok, the second son and third child of Ruby and Doyle Pickel. Doyal is preceded in death by his parents, an older brother, his older sister Reba, and younger brother Ron. Doyal graduated from Henryetta High School in 1954, afterwards joining the Army and doing a tour in Korea. Upon returning from Korea he worked as a civilian in the air force and moved home to Henryetta. It was at a chance meeting in Tulsa that he met his future wife, Kay. Kay, a Missouri girl, and Doyal, were married on March 2, 1962 at Henryetta First Church of the Nazarene. Doyal would hold his first child in Muskogee, his second in Texas, and his last in McDonald, Ohio where the family would live for many years. The family moved home to Henryetta in 1982, where two of his children would graduate, and where Doyal would spend the rest of his life. Doyal and Kay would meet their first grandchild in 1985, the second in 1990, and the third on Kay’s birthday in 1996. Doyal retired from his military personnel job in 1987, it was during this season of his life that he found his true passion, driving a school bus. A popular bus-driver, Mr. Pickel always had a smile and a lifesaver. A founding member of the infamous McDonald’s breakfast club, on any given morning Doyal could be found amongst his friends, enjoying coffee and a sausage biscuit…. And not causing trouble. Henryetta First Church of the Nazarene also counted Doyal as an active member, Doyal was a devout Christian and rarely missed a Sunday. Doyal and Kay would spend their summers at Camp Bond, often bringing their grandchildren, to cook for camp goers. Doyal would care for the grounds, help around the kitchen, but mostly he would fish. Doyal loved God, fishing, Oklahoma football, spending time with his ever-growing family of grandchildren & great-grandchildren, and his wife of fifty-nine years, Kay. We take solace in knowing we will see Doyal again, he’s merely resting his eyes. Doyal is survived by: His wife and dog, Kay and Penny Pickel of the home, three children: Diana Pickel Tucker (Brian), Scott Pickel, and Joey Pickel, three grandchildren: Tommy Pickel (Rikki), Sara Sanford, and Jon Pickel (Olivia), his two great-grandchildren: Trace and Aiden Pickel and many nieces and nephews Memorial service will be 2:00 pm, Tuesday, November 16, 2021 at the First Church of The Nazarene with Pastor Tim Cole, officiating. Service are under the direction of the Rogers Funeral Home.

Doyal Gene Pickel went to be with the Lord on the morning of November 12, 2021 at 85 years old. Doyal was born on July 6,1936 in Henryetta, Ok, the second son and third child of Ruby and Doyle Pickel. Doyal is preceded in death by his parents,... View Obituary & Service Information

The family of Doyal Pickel created this Life Tributes page to make it easy to share your memories.

Doyal Gene Pickel went to be with the Lord on the morning of...

Send flowers to the Pickel family.