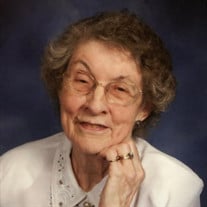 Doris June Taber a long time resident of Henryetta, OK passed from this life on September 27, 2021. Born January 31, 1935 to Robert E. Lee Roberts and Jesse Irene (Runyan) Roberts in Muskogee, Oklahoma. On June 29, 1953 Doris married Billy Ray Taber. For nearly 66 years, until his death in 2019, Bill and Doris shared a happy and hard working life. Doris was helpmate and partner to Bill, regularly working alongside him in the home, garden, or pasture, and finding great satisfaction in keeping him well fed every day. They had two children Beverly and Belinda, and regularly welcomed others in to their home, sometimes for dinner and sometimes for extended stays. Doris was an incredibly dedicated homemaker and wife, but also worked in a variety of jobs throughout her life including retail and secretarial positions. Doris was born to serve. She dedicated her life to serving those around her. She attended and served at Immanuel Baptist Church in Henryetta for most of her life. She served countless children and adults through Sunday School, Vacation Bible School and other church activities. She served her friends and family with letters, cards, quilts, blankets, meals, desserts and endless ice tea. Doris rarely stayed seated during any meal she attended, always looking for the next opportunity to serve. Doris was known to her grandchildren and many others, affectionately as Mammer. For her grandchildren, Mammer was a consistent and loving presence in their lives, a unique personality, and a grandmother that you wanted to share with others. Mammer was a grandmother to be proud of. She could crochet, sew, garden, cook, fish and drive a tractor. She was a successful farmer, rancher and animal lover. She was friend to all and became “Mammer” to so many of her kids’ and grandkids’ friends over the years. She was a sharp minded basketball fan and stat keeper at her grandkids sporting events, where her loveable quirk of colorful socks and stuffed animal accessories were often noticed by other fans. Mammer’s love of purple was known by many. She never missed an opportunity to display her favorite color for all to see. Mammer spent many years driving around Okmulgee county in the “Mammermobile” a purple Ford Taurus marked with a personalized plate of “Mammer”, to leave no doubt of who the driver was. Mammer was known as shrewd and thrifty. She was a known recycler and repurposer for many years before it became popular to be so. Despite little formal education she made good financial decisions and land investments. She used that success as an opportunity to show generosity by helping support family and close friends through home or car loans and other generous acts. Her grandkids and many others were beneficiaries of a “Mammer hand shake” over the years, which included a folded crisp dollar bill passed during the handshake. In her later years, Doris became Mammer to a new generation. She shared her unique personality, humor, generosity, time and service with her six great grandchildren who visited her often. Doris “Mammer” Taber will be greatly missed by friends, family and community members. She is preceded in death by her parents, husband and her sisters, Barbara Brice, Jean Simmons and her brother Jerry Roberts. Survived by: Daughters: Beverly Henson and husband Donnie of Okmulgee Belinda King and husband Cliff of Gulf Shores, Al Grandchildren: Aaron Henson and wife Bethany; Meredith Talley and husband Dustin; Trevor Henson and wife Lauren; Colin “Chummy” Henson; Whitlee Peitz and husband Alex Great Grandchildren: Rayleigh & Molly “pop” Henson; Brant & Flynn Talley; Harper & Hayes Henson Funeral service will be 2:00 pm, Monday, October 4, 2021 at the Immanuel Baptist Church with Rev. Brayden Buss, officiating. Interment will be at the New Senora Cemetery under the direction of the Rogers Funeral Home. Memorials in Doris's name can be made to the Alzheimer's Association, 225 N. Michigan Ave. Floor 17 Chicago, IL 60601 or the Baptist Children's Home, 12700 E. 76th St. North, Owasso, OK 74055 Livecast of service will be on the Rogers Funeral Home Facebook Page.

The family of Doris June Taber created this Life Tributes page to make it easy to share your memories.

Send flowers to the Taber family.