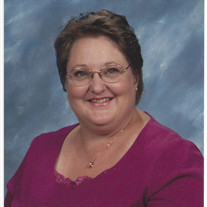 Donna Browning a resident of Dustin, Ok passed away on August 29, 2014 in Midwest City, Ok at the age of 59. Born November 26, 1954 in Harrah, Ok to Glen and Elnora (Webber) Dillon. She worked in Hospital Administration and a former secretary... View Obituary & Service Information

The family of Donna Browning created this Life Tributes page to make it easy to share your memories.

Donna Browning a resident of Dustin, Ok passed away on August...

Send flowers to the Browning family.