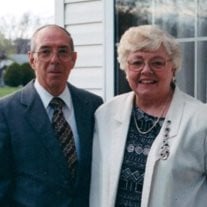 Donald Lee Johnson was born in Henryetta on October 6, 1927 to Levi Burnett Johnson and Thenia Alice Stiles Johnson. He passed from this life to be with his heavenly Father on Monday August 26, 2013, just a few weeks shy of his 86th birthday. He was a graduate of St. Michael’s High School and a private in the US Army. He served in the occupation forces in Japan. He married his sweetheart, Deedie May Vaughn on April 8, 1950 in Henryetta. Deedie has been the faithful “woman beside the man” for 63+ years. Lifelong residents of Henryetta, Don & Deedie moved to the Baptist Village in Okmulgee in April of 2013. Don was employed as a glass worker for American Saint Gobain in Okmulgee for 25 years. He then worked for Crest Engineering in Tulsa; Ingersol-Rand in Okmulgee; DHS in Okmulgee; and finally retired in 1992 after eleven years of employment at Kelco in Okmulgee. He was a member and deacon at Immanuel Baptist Church in Henryetta. His dedication and servant heart at his church will long be remembered. He was a faithful man of integrity, a great Christian husband, brother, father, grandfather, great-grandfather, uncle and friend. He had a ready smile and handshake and a dry sense of humor. He loved children and would always tickle and tease to get them giggling. He was a humble man whose greatest joy was serving his Lord in a meek and quiet way; always willing to help people without being acknowledged or needing a pat on the back. He was preceded in death by his parents and by his third daughter Donna Johnson Lamar. He is survived by his loving wife Deedie, his children and their spouses; Deborah & David Morrow of Sand Springs, Denise & David Eldridge of Bixby, Dianne & Todd Groff of Henryetta, Darin & Amie Johnson, recently of Checotah, now of Henryetta. Eleven grandchildren & spouses: Erick & Annette Sisson, Nathan & Angelique Lamar, Daniel & Teresa Morrow, Dustin & Megan Morrow, Derek & Casey Morrow, Kharmon & James Wofford, Megan Eldridge & Jeremiah, Morgan & Jr. Chupp, Ethan Groff, Kobe and Kailyn Johnson; 13 great-grandchildren: Krystian, Kelsey & Kameron Sisson; Nathan, Noah, Jonah & Eli Lamar; Preston & Kerstyn Ginetto; Ellie & Mila Morrow; Molly Morrow and Abby Eldridge; one sister, Reba Stubbs of Tulsa and one brother Earl Johnson of Henryetta; one brother-in-law, Jerry Cotteral of Claremore, one sister-in-law, Sharon Sivils of Okla. City; many nephews and nieces and a wonderful church family. Services conducted by Rogers Funeral Home, will be Friday, August 30, 2013 at 11:00 AM at Immanuel Baptist Church. Interment will follow at Westlawn Cemetery, Henryetta.

Donald Lee Johnson was born in Henryetta on October 6, 1927 to Levi Burnett Johnson and Thenia Alice Stiles Johnson. He passed from this life to be with his heavenly Father on Monday August 26, 2013, just a few weeks shy of his 86th birthday.... View Obituary & Service Information

The family of Donald Johnson created this Life Tributes page to make it easy to share your memories.

Send flowers to the Johnson family.