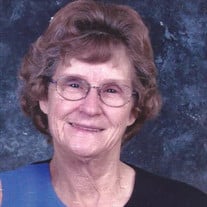 Delia Jequita (Newberry) Martin, 85, of Henryetta, OK passed away on October 30, 2021. She was born in Beggs, OK on September 3, 1936 to Columbus Bryson and Mary Ellen Newberry. She was a graduate of Okmulgee High School and married Frank W. Martin on October 29, 1954. She lived the majority of her married life in Altus, OK where Frank was employed as an electronic technician at Altus AFB. They had 3 children, Danny Roy in 1955, Donna Ruth in 1960, and David Ross in 1961. The naming of their children with the same initials was an example of how they treasured their children and wanted to create a unique family unit. After Jequita raised her children, she went to work for Altus Public Schools and was a head cook and later a cafeteria clerk. She so enjoyed the contact with the children at the middle school with many of them calling her “grandma.” After her husband’s death in 2004, she eventually moved to Henryetta, OK to be closer to her family. She was also preceded in death by her father when she was 7 years old, her beloved mother Mary, brothers Bill Newberry and Dal Newberry, and sisters, Ruth Catlett and Dolly Fuller. Jequita was a member of the Henryetta Church of the Nazarene and dearly loved her church family in both Altus and Henryetta. She loved the Lord with all her heart and felt she should be in church every time the church doors were open when possible. She loved her family and made every single one of them feel special, and they loved her dearly in return. She is survived by her sons, Danny and wife Ruth Martin, David and wife Kathi Martin, and a daughter, Donna and husband Tim Levi along with her 10 favorite grandkids and spouses and her 15 favorite great-grandkids who often called her Grams or Grandma Keta. They include Malinda George with husband Wesley and son James; Danelle Ferqueron with husband Bill and sons Wyatt and Weston; Alicia Bates with husband Matt and sons Marcus and Micah; Ben Martin with wife Emily and children Caleb and Cheyenne; David W. Martin with wife Penny and daughters Calliope, Cora, Charlotte, and Madeline; Jason Levi with wife Heather and daughters Isabella (Bella) and Elizabeth (Ellie); Jennie Gregory with husband Tim and children Nicholas and Alexandra (Lexi); Janice Levi; Maegan Martin; and Matthew Martin with fiancee Mackenzie Westfahl. She is also survived by two younger brothers—Lum Newberry of Tulsa, OK and Carl Newberry with wife Cathy and another sister-in-law Carolyn Newberry along with numerous nieces and nephews many of whom called her their “favorite aunt.” Jequita made everyone feel welcome and loved, and she basically met no stranger. She will be greatly missed by all who knew her for her kindness, warmness, love of playing games with friends and family and her enchiladas. Funeral service will be 10:00 am, Wednesday, November 3, 2021 at the Nazarene Church. Interment will be at 2:00 pm, Thursday, November 4, 2021 at the Altus City Cemetery, Altus, Ok, under the direction of the Rogers Funeral Home.

Delia Jequita (Newberry) Martin, 85, of Henryetta, OK passed away on October 30, 2021. She was born in Beggs, OK on September 3, 1936 to Columbus Bryson and Mary Ellen Newberry. She was a graduate of Okmulgee High School and married Frank... View Obituary & Service Information

The family of Delia Jequita Martin created this Life Tributes page to make it easy to share your memories.