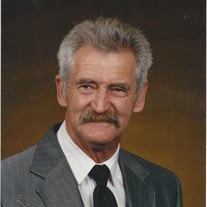 Again the pale horse and rider has come to another home. This time to take another rider safely home to the Lord. Dale L Warner was taken home to the Lord on December 6, 2015. He was born in Lebanon, NE at home on January 18, 1944 to Harry Warner and Aril Ankenman, He was 71 years old. Dale grew up in Lebanon where he graduated from Beaver Valley HS in 1963. He was united in marriage to Sharron Blickenstaff of Wilsonville, NE on September 18, 1964. They made their home west of Wilsonville until 1967 when they moved south of Hendley to farm. In 1983 they moved to Lebanon, NE where he worked for 3 Oaks Heating and plumbing in McCook, NE. In 1986 Dale and Sharron become over the road team truck drivers until 1993 when they moved to Bozeman, MT where Dale continued to drive truck. Dale and Sharon then moved to Weleetka, OK in 1997 where they raised cattle and he continued driving trucks. In 2005 he retired and remained on the ranch until his death. They were married 51 years. Dale was a member of the Weleetka Baptist Church. He enjoyed many things in life, such as hunting, motorcycling, shooting black powder, going to the lake to name a few but most of all he enjoyed his family and friends. Survivors include his wife Sharon of the home; two daughters and their husbands, Sheila and Cline Worlow of Weleetka,OK, Gina and Shay Wise of Midland, TX; five grandchildren, Caul, Bailee and Justice Worlow; Shaylyn and Kenzie Wise; One brother and wife Gail and Lori Warner of Holbrook, NE and one sister and husband Danny and Larry Blackmon of Bartley, NE; three sisters in laws; Frances Warner of Lebanon, NE, Barbara Blickenstaff of Arapahoe, NE, Betty Warner of McCook, NE. One brother in law and wife Lowell and Ardyus , Smith Center, KS; nieces and nephews, other relatives and friends. He is preceded in death by his parents, two brothers, Dean and Neal; Two sisters Virginia Shroder and Ramona Chambers. Family visitation will be Monday, December 7, 2015 at the Rogers Funeral home from 5:00 to 8:00pm. Interment will be at the Lebanon Cemetery in Lebanon, NE. Family request memorial in the “Memory of Dale” be made to the charity of ones choice. Services under the direction of the Rogers Funeral Home.

Again the pale horse and rider has come to another home. This time to take another rider safely home to the Lord. Dale L Warner was taken home to the Lord on December 6, 2015. He was born in Lebanon, NE at home on January 18, 1944 to Harry... View Obituary & Service Information

The family of Dale Warner created this Life Tributes page to make it easy to share your memories.

Again the pale horse and rider has come to another home. This...

Send flowers to the Warner family.