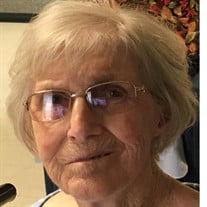 Betty Corrine Carlton, a long-time resident of Henryetta, passed this life at the age of 88 years on Monday, November 30, in Broken Arrow, Okla. Corrine was born to Leroy and Ada (Shockley) Brumfield on August 18, 1932, in Sardis, Oklahoma. Her industrious, no- nonsense personality was evident from the start, and Corrine was actively engaged in her schooling at Tuskahoma. She was a star basketball player and year after year received “Perfect Speller” awards. She also served as assistant editor of the school newspaper, The Tuskahoman. Corrine married her high school sweetheart, Bardine Carlton, on May 19, 1950, in Van Buren, Arkansas. They made their home in Henryetta, where they raised their three daughters. Corrine worked hard to provide a comfortable home life for her family. There wasn’t anything she couldn’t do or any project she wouldn’t tackle. Her two oldest daughters remember going to sleep to the sound of hammering as their mom and dad built their own house from the foundation up. Corrine was always the first to start working and the last to stop. Her remarkable skills in gardening, sewing, and especially cooking were evident to the friends and family whom she welcomed to her home for a meal or an overnight stay. Corrine wasn’t especially gushy or emotive, but most-naturally expressed her love through her chicken and dumplings, fresh-fried okra, or blackberry cobbler made from blackberries picked from her bushes. In the mid-sixties, Corrine took a job at Cost Plus and then Dollar General. She became the manager of the Dollar General store and worked there until retirement - all while continuing to serve her family as before. Her daughters delighted to see their strict, tough mother turn into a soft-hearted grandmother as she enjoyed the addition of four grandchildren into the family. In her retirement years, Corrine was an active member of Immanuel Baptist Church. She joined the ladies quilting group and found camaraderie around the quilting circle. She was very particular about her stitches, and her finished products are treasures gifted to her children, grandchildren and great-grandchildren. The last two years, Corrine was a resident of Broken Arrow Nursing Home, and the family will forever be grateful for the love that was shown to her by some very special caregivers, especially Shey and Cara! Preceding her in death was husband, Bardine Carlton, parents, Leroy and Ada Brumfield, brother, James Brumfield, and Son-in-Law, David Black. Survived by her daughters: Claudia Black of Broken Arrow, BernaDean Barrick of Henryetta and Letha Carlton of Tulsa. Grandchildren: Pryce Black and wife Ashley, Kimberlie Carver and husband James, Rebekah Scherman and husband Cody, Jeremiah Barrick and wife Felicia, Sharise Smock and husband EJ. Great-Grandchildren: Austin Black, Madeleine Black, Ainsley Black, Camille Black, Harley Munholland, Cooper Scherman, Jayla Nye, Jeremiah Nye and Jett Barrick, Abraham Smock, Samuel Smock and Sophia Smock, Great-Great-Grandchild: Sybil Black Service will be 2:00 pm, Saturday, December 5, 2020 at the Rogers Funeral Home Chapel with Rev. Ryan Wells, officiating. Interment will follow at the Westlawn Cemetery. Pallbearers: Pryce Black, James Carver, Jeremiah Barrick, Cody Scherman, EJ Smock, and Vernon VanMeter

Betty Corrine Carlton, a long-time resident of Henryetta, passed this life at the age of 88 years on Monday, November 30, in Broken Arrow, Okla. Corrine was born to Leroy and Ada (Shockley) Brumfield on August 18, 1932, in Sardis, Oklahoma.... View Obituary & Service Information

The family of Corrine "Betty" Carlton created this Life Tributes page to make it easy to share your memories.

Send flowers to the Carlton family.