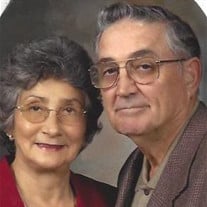 Collene Morrison Jones born August 21, 1937 in Lenna, Oklahoma to John and Allie Morrison, deceased. In 1952, she moved to Dustin Oklahoma where she met the love of her life, James D. Jones. Born of the marriage are two daughters Vicki Jones Beals and Robin Jones Phillips. Collene and her family lived in various locations as part of their career in the military making many friends which she cherished. After retirement from the military, Collene and her family moved back to Okmulgee Oklahoma where she worked at the Okmulgee Daycare for years. Thereafter she worked for the Muscogee Creek Nation as a Community Health Representive. Collene and James moved to Dustin Oklahoma where they became members of the Dustin Baptist Church. Collene enjoyed living on the farm taking care of her animals. Collene was blessed with three grandsons, Dr. Bryan Beals, Robbie Crosier, and Charles Beals and four granddaughters, Brooklyn, Emily, and Alexis Beals and Cora Crosier. Collene went to heaven on in Yukon, Oklahoma leaving behind her husband of 61 years, daughter Vicki and son in law Bobby Beals, Watonga, Ok; daughter Robin and son in law Robert Phillips, Bartlesville, Ok. Grandsons Dr. Bryan Beals and wife, Dr. Jenny Beals, and their children, Brooklyn, Emily, and Alexis, Lawton, Ok; Robbie Crosier and wife, Mallory Crosier, and their daughter, Cora, Edmond, Ok; and Charles Beals and his fiancé Elizabeth Baldwin, Kansas City, MO. She is survived by her sisters, Estaline McGuire, Eufaula, Oklahoma and Charlene Thompson, Schulter, Ok and their families. In lieu for flowers, donations can be made in her honor to St. Jude's Children's Hospital. Grave side services to celebrate her life will be held at the Hillcrest Cemetery in Weleetka, Oklahoma on Monday, February 8, 2016 at 2:00 pm under the direction of the Rogers Funeral Home.

Collene Morrison Jones born August 21, 1937 in Lenna, Oklahoma to John and Allie Morrison, deceased. In 1952, she moved to Dustin Oklahoma where she met the love of her life, James D. Jones. Born of the marriage are two daughters Vicki Jones... View Obituary & Service Information

The family of Collene Jones created this Life Tributes page to make it easy to share your memories.

Send flowers to the Jones family.