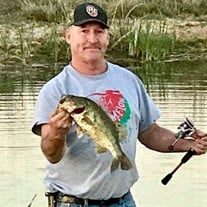 John Charles “Chuck” Kerr was born Friday, January 6, 1961 in Henryetta, Oklahoma. He passed from this life on November 25, 2018 in Tulsa,Ok, at the age of 57. Chuck was a baptized believer and had great faith. He is survived by many family and friends: Bernadine, of the home, son Colt Kerr of Ponca City, daughter Reagan Kerr and grandson Gannon Kerr of Tulsa and daughter Savannah Kerr of the home. Chuck is also survived by parents Margie Kerr of Cleveland, Oklahoma and John Kerr and wife Wilma of Henryetta; his sister, Teresa Kerr Lewis and husband Jerry of Mannford, step sister Julie Aldridge of Coweta, step brother Jimmy Floyd of Henryetta, and half sister Kristen Stafford of Arkansas. Chuck was very special to nephews Ian and Travis Lewis, and niece Kayla Lewis, as well as many family and friends. He considered many friends as family, and treated them as such. Chuck is preceded in death by grandparents BF and Bonnie Mangrum and Thomas and Juanita Kerr. Aunt, Betty Kerr Dodge. Chuck graduated from Weleetka High School in 1979, and went on to obtain his bachelor’s degree from East Central University in Ada, with teaching certifications from Oklahoma and Texas. Chuck loved coaching. He coached everything from football to baseball to basketball to golf to track and tennis. He coached across Oklahoma from Felt and Boise City, to Hanna and Haileyville. He even crossed the Red River once to coach in Allen, Texas. His favorite sport to coach was football. He was an Assistant football coach in 1993 when East Central University won the NAIA National Championship. Chuck loved to hunt and fish. His favorite place to be was in the woods somewhere or on a pond bank. He loved his dogs and always had several. He was an accomplished outdoorsman in countless areas and shared his knowledge and expertise with many young people. Family will be receiving friends at the Rogers Funeral Home, Thursday evening from 6:00 to 8;00 pm Funeral service will be 2:00 pm, Friday, November 30, 2018 at the Church of Christ (5th and Broadway) with Tony Kessee, officiating. Interment will follow at the Westlawn Cemetery under the direction of the Rogers Funeral Home. Donations can be made to help with expenses in memory of Chuck

The family of Chuck Kerr created this Life Tributes page to make it easy to share your memories.

Send flowers to the Kerr family.