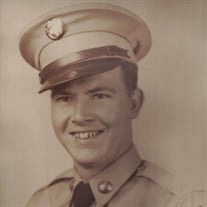 Charles Henderson a resident of Dewar, passed this life on Saturday, August 3rd, 2019 in McAlester,Ok at the age of 87. He was born October 25, 1931 in Spiro, OK to Lou and Hester (Weir) Henderson. Charles was a veteran of the Korean War and... View Obituary & Service Information

The family of Charles Henderson created this Life Tributes page to make it easy to share your memories.

Charles Henderson a resident of Dewar, passed this life on Saturday,...

Send flowers to the Henderson family.