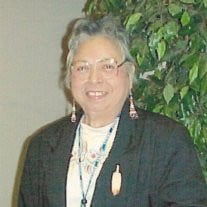 Carol Ann Asbury Morris of Tulsa, OK passed away April 25, 2013 in Corpus Christi, TX at the age of 72. Carol was born July 2, 1940 the last of five siblings at her parents’ home near Bryant, Oklahoma to Joe Asbury and Lillie Lewis. Carol attended school in Weleetka, OK where among other successes was an all state basketball star. After graduating high school, she attended Draughn Business School on Oklahoma City to learn administrative skill such as short hand. Soon afterwards she met and married Fredrick N. Morris Jr. and had one son, Artussee Dean Morris. Moving to Rockport, TX in 1978 she worked as a Park Ranger at Goose Island State Park. After graduating from Del Mar College in Corpus Christi, TX with an Associate’s Degree, in 1984, she moved backed home and settled in Tulsa where she started working for the City of Tulsa Code Enforcement Division and ultimately retired. Throughout her life she had a keen interest in helping others. While in Rockport, she volunteered for the Aransas County EMS and U.S. Coast Guard Auxiliary. After moving back home she volunteered and served in numerous organizations, such as secretary for nine years for the City of Tulsa Retiree Association, nine years as treasurer for the Tulsa Indian Community Foundation, 18 years holding various positions including Board Member and chairman (twice) for the Tulsa Creek Indian Community, and was recently recognized for her 20 year commitment to the Greater Tulsa Indian Affairs Commission. Not to mention her commitment to her community by serving on the Tulsa Indian Coalition Against Racism, Tulsa Good Shepard Association, Red Cross, State of Oklahoma Code Enforcement Association. She once ran for tribal representative for the Tulsa District, ultimately losing by five votes, owing to her popularity. And for her commitment to native peoples, she was recognized as an Oklahoma Indian Elder of the Year. Besides her commitment to others, she enjoyed making jewelry, sewing, fishing, camping, and traveling. She traveled from the eastern seaboard including New York City to Seattle and to British Columbia and Mexico City. Plus in keeping with her tribal traditions, she kept camp as her mother did at Arbeka Ceremonial Grounds. She is preceded in death by her parents, brothers William “Buster” Barnett, Wilbur Starr, John Joe Asbury and Wesley Asbury. She is survived by her son Artussee Dean Morris, granddaughter Taneesa Ann Morris, several nieces and nephews and a host of cousins. Visitation will be available at Rogers Funeral Home in Henryetta, OK from 8:00 a.m. to 3:00 p.m. on May 1. A wake will be held at Hickory Ground Church #2 south of Henryetta, OK on Wednesday, May 1 at 7:30 p.m. Funeral services will be held at 11:00 a.m. Thursday, May 2 at Hickory Ground Church #2. In lieu of flowers that family asks that donations be made to the Muscogee (Creek) Nation Higher Education Scholarship Foundation Program, P.O. Box 580, Okmulgee, OK 74447. Please make checks out to the above and in the memo put “in memory of Carol A. Morris”. Mvto.

Carol Ann Asbury Morris of Tulsa, OK passed away April 25, 2013 in Corpus Christi, TX at the age of 72. Carol was born July 2, 1940 the last of five siblings at her parents’ home near Bryant, Oklahoma to Joe Asbury and Lillie Lewis. Carol attended... View Obituary & Service Information

The family of Carol Ann Morris created this Life Tributes page to make it easy to share your memories.

Send flowers to the Morris family.