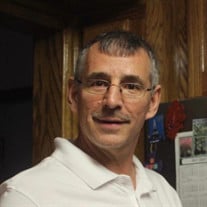 Carl Don Craft, 61, of Henryetta, OK, passed away on September 25th, 2020. Carl was born in Okmulgee, OK on October 28th, 1958. Growing up, he loved to go fishing and spent hours outside playing all kinds of games with his brothers and friends. He graduated from Henryetta High School in 1976, where he excelled at sports. Following graduation, he took a job at Anchor Glass in Henryetta where he continued his career for 44 years. He will be fondly remembered by his coworkers and friends at the plant. Carl was a devoted son, brother, husband, father, grandfather, uncle, and friend. He enjoyed spending time with his family, watching Ancient Aliens and Nascar, going on long drives, and listening to Taylor Swift. He could light up a room with his smile and laugh, and he never met a stranger. He will be greatly missed by all who knew him. Carl is preceded in death by his father Jackie Ray Craft and brother Jackie Ray Craft Jr. He is survived by his wife, Sherry Craft, and his beloved dog Sassy of the home; his mother Pearl Craft of Henryetta; daughter Carlie Wheeler and husband Brandon of Henryetta; daughter Kendall Craft & partner Bryant Evans of Winston-Salem, NC; brother Gary Craft and wife Amber of Oklahoma City; sister-in-law Mary Craft of Henryetta; grandchildren Dylon Franklin and wife Courtney, Kaitlyn Clark, Ryan Clark, Nathan Franklin, and Zackary Mullen; great-grandchildren Darrell and Cambree Franklin; and many nieces, nephews, great-nieces, great-nephews, and a host of family and friends. Family will be greeting friends at the Rogers Funeral Home Chapel, Monday from 6:00-8:00 The funeral service will be held at 2pm September 29th, 2020 at the Henryetta First Baptist Church with Rev. Ryan Wells, officiating. Interment will follow at the Senora Cemetery under the direction of the Rogers Funeral Home. Pallbearers will be Jimmy Thompson, Dee Russell, Larry Arnold, Joe Gene, Kevin Underhill and Terry Morris. Honorary Pallbearers will be Zackary Mullen, Ryan Clark, Dylon Franklin

Carl Don Craft, 61, of Henryetta, OK, passed away on September 25th, 2020. Carl was born in Okmulgee, OK on October 28th, 1958. Growing up, he loved to go fishing and spent hours outside playing all kinds of games with his brothers and friends.... View Obituary & Service Information

The family of Carl Craft created this Life Tributes page to make it easy to share your memories.

Carl Don Craft, 61, of Henryetta, OK, passed away on September...

Send flowers to the Craft family.