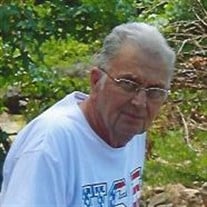 Carl Wayne Chaney was born in Henryetta at his parents home on February 22, 1939. He grew up in the same neighborhood with his sister, aunts, uncles and cousins where he known to cause a lot of mischief. He was a member of the 1956 Fighting Hen Marching Band who marched and performed in the Rose Bowl Parade in California. After graduating in 1959, Carl worked at the glass plant for many years. On March 22, 1963, he married Phyllis Marshall. They celebrated 53 years of marriage in 2016. Carl and Phyllis raised three daughters in McAlester and finally making their home in Henryetta for the past 40 years. As a working man, Carl worked for Rockwell/Boeing in McAlester and retired after 31 years of service. During that time as a machinist, he helped build parts for commercial airlines and military aircraft as well as the NASA Space Shuttle Program. Carl was a longtime member of the UAW local in McAlester where served as the bargaining chairman for many years. After retirement, Carl and Phyllis spent many years traveling the United States, England and Scotland. Carl had a great love for travel and visited 40 states even accidentally being in a Homecoming Parade in Illinois, meeting President and Mrs. Carter in Georgia, falling into a cold mountain creek in Colorado and visited all the Oklahoma State Lodges. He was a classic muscle car and music enthusiast from his teens, loved to buy tennis shoes for his kids and grandkids and loved to travel the back roads of Oklahoma. One of his biggest passions was coffee, even in 100 degree Oklahoma heat. He was the first man in Oklahoma to be certified as a Girl Scout Camp Leader. He was also a 32nd degree Mason. Carls first priority was the love and care of his family. His grandsons were a special pride and joy to “Papa”. He was a longtime member of the Church of Christ where he served as a deacon for several years. On November 11, 2016 Carl died at home at the age of 77. He is survived by his wife Phyllis Chaney, sister Joyce Highfill and husband Bill of Owasso, Daughters, Vicki Chaney of Henryetta, Penny Sadler and husband Jason of Glenpool, Grandsons; Cash Bridges of Tahlequah, Cade Bridges of Norman and Boone Sadler of Glenpool. He is preceded in death by his parents, Jess and Katherine Chaney, Sister; Betty Lou Chaney and a daughter Cara Bridges. A Celebration of Carls life will be at Westlawn Cemetery on Tuesday, November 15, 2016 at 2:00 pm.

Carl Wayne Chaney was born in Henryetta at his parents home on February 22, 1939. He grew up in the same neighborhood with his sister, aunts, uncles and cousins where he known to cause a lot of mischief. He was a member of the 1956 Fighting... View Obituary & Service Information

The family of Carl Chaney created this Life Tributes page to make it easy to share your memories.

Carl Wayne Chaney was born in Henryetta at his parents home on...

Send flowers to the Chaney family.