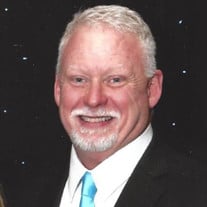 James Clay “Butch” Howard, a resident of Piedmont, OK, passed from this life on November 29, 2020 at the age of 56. Butch was born on May 2, 1964 in Henryetta, OK to James Howard and Joyce (Meadors) Howard. Butch is a graduate of Henryetta High School and earned a Bachelor of Science in Pharmacy at Southwestern Oklahoma State University. He also achieved NDT Level III in Radiography as recognized by The American Society for Nondestructive Testing, Inc. and most recently worked as a construction manager for EnLink Midstream. His most coveted role was Grandpa, as indicated by the inordinate amount of gifts, time, and energy he invested in his grandchildren. Butch married Rhonda Russell on May 13, 2016 in Eufaula, OK and they shared many memorable times together. Butch worked hard and played even harder. He loved to be out on the lake in his boat, spending time with those he loved most. Those who got the opportunity to experience the lake with Butch can attest to his affinity with the water. He also loved his Sooners, although his attention span rarely allowed him to watch a game in its entirety. It should also be noted that he was very skilled in water gun and water balloon conflicts, often the instigator and aggressor of the battle. He had a huge heart coupled with an infectious laugh and was unparalleled in his generosity. Butch also took pride in spoiling his four-legged friends, Boo Buddy and Little One, and often commented how the dogs had a much better life than most people. In his career, Butch was consistently recognized as a great asset who gave selflessly to the teams he was a part of. His team is extremely saddened by the sudden, unexpected loss of their friend and mentor. Butch’s departure has initiated a focus for suicide prevention to encourage others to seek help during difficult times. Butch is survived by his loving wife Rhonda; His daughter Cortney and husband Jason Dick of Owasso, OK; daughter Lexxi Spraberry of Highlands Ranch, CO; daughter Paige Bradbury of Mustang, OK; Grandchildren Peyton and Cambree; Parents James and Joyce Howard of Owasso, OK; His brother Jeff Howard and wife Pam of Brownsboro, TX; His sister Jamie Howard of Scarborough, ME; His nephews and nieces Jon Howard and wife Emily of Abilene, TX; Holland Howard of Scarborough, ME; Mollie Howard of Scarborough, ME; His four-legged companions Boo and Little One; Many aunts, uncles and cousins whom he loved very much. Family will be receiving friends, Friday evening from 6:00-8:00 at the Funeral Home. Service will be 10:00 am, Saturday, December 5, 2020 at the Nazarene Church. Interment will follow at the Westlawn Cemetery under the direction of the Rogers Funeral Home. Due to COVID restrictions we will be streaming this live from Rogers Funeral Home facebook page.

The family of Butch Howard created this Life Tributes page to make it easy to share your memories.

Send flowers to the Howard family.