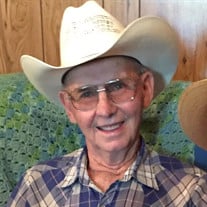 Billy Ray Taber, a resident of Henryetta, passed this life on May 18, 2019 in Okmulgee at the age of 84. Born May 5, 1935 in Hanna, OK to Willie Houston and Mary Elizabeth Ann (Mott) Taber. Bill married Doris Roberts on June 29, 1953. For 65 years and 11 months, he ate dinners by her side, where she never left out the sweet tea and baked beans and he never forgot to ask for seconds or dessert. Together they had two children, countless animals, and created a happy home full of laughter, friends, hard work and games of Wahoo. They were known to regularly welcome others in to their home, sometimes for dinner and sometimes for extended stays. Bill worked at Eagle Picher Smelter, OKC Refinery in Okmulgee, owned and operated Taber’s Texaco and retired from the Oklahoma Dept. Of Transportationwhere he was known as a hard worker, friend and master of heavy machinery. Bill had many hobbies involving the outdoors, from hunting and fishing to horses and roping. He shared his love of the outdoors with many faithful and obedient four legged best friends over the years and could often be found hauling hay with “Bluesie”, working cattle with “Lamar” or checking on the chickens with “Jethro”. Bill was considered by many to be a master storyteller. He specialized in tall tales that were never short on fantastic details or a satisfying punch line. Bill was a skilled carpenter, mechanic, handyman,welder, and builder. He demonstrated his construction ability by building his own family home in the 1970s and many years later by gifting his granddaughter with the only playhouse in Okmulgee County with running water and electricity. He enjoyed working with his hands and often used his skills to serve neighbors, family and friends. Bill loved children and always found time to play games and tell jokes with them. He was a devoted grandfather that every one of his grandchildren are proud to call “PaPa”. He will be remembered by his grandkids as a strong, talented, funny, loyal, loving,honorable man. In his later years he found great joy in spending time with his great grandchildren, sharing his love of animals and jokes with another generation. Bill was a faithful member of the Immanuel Baptist Church in Henryetta for many years. He is preceded in death by his parents and sisters:Lorene Hunter, Doris Hardgrave and Ann Baggs. Survived by his wife Doris Taber of the home Daughters: Beverly Henson and husband Donnie of Okmulgee Belinda King and husband Cliff of Gulf Shores, Al Grandchildren: Aaron Henson and wife Bethany; Meredith Talley and husband Dustin; Trevor Henson and wife Lauren; Colin “Chummy” Henson; WhitleePeitz and husband Alex Great Grandchildren: Rayleigh & MollyPop Henson; Brant & Flynn Talley; Harper & Hayes Henson Brother: Dee Taber and wife Judith of Dewar Memorial donations can be made to the Alzheimer’sAssociation or the Baptist Children's Home. Funeral service will be 2:00 pm, Tuesday, May 21st at the Immanuel Baptist Church with Rev. Brayden Buss officiating. Interment will follow at the New Senora cemetery under the direction of the Rogers Funeral Home.

The family of Billy Ray Taber created this Life Tributes page to make it easy to share your memories.

Billy Ray Taber, a resident of Henryetta, passed this life on...

Send flowers to the Taber family.