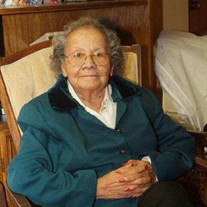 Ann Stroup a resident of Henryetta passed this life on March 16, 2018 at the age of 91. Born April 17, 1926 in Thurber, TX to Alfonso and Jesus (Leybas) Leos. She worked as a housekeeper and was a member of St Michaels Catholic Church and... View Obituary & Service Information

The family of Ann Stroup created this Life Tributes page to make it easy to share your memories.

Ann Stroup a resident of Henryetta passed this life on March...

Send flowers to the Stroup family.